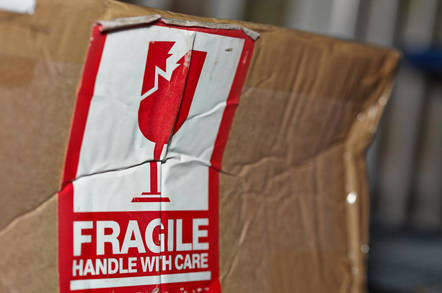 Various Box Enterprise customers have inadvertently shared, and probably still are sharing, sensitive corporate data on the public internet. And that included Box itself.

Vulnerability-hunting biz Adversis sounded the alarm this week on the information leaks, after finding it was easy to guess app.box.com URLs to organizations' sensitive Box-hosted folders in the cloud – directories that including passport photos, social security numbers, and financial records. These URLs were, or still are, configured as publicly accessible, allowing the Adversis crew to potentially leaf through terabytes of internal data.

In a statement to El Reg, a Box spokesperson confirmed even its own folders were accidentally exposed: "There were some Box corporate links that were wrongly set to open or public permission. They have all been updated and are no longer available."

The problem, explained Adversis, is that the Box Enterprise service will allow customers to create unique URLs to specific Box-hosted folders of files. Anyone who knows a particular URL can view the documents if it is set to public. Unfortunately, in many cases, the URLs end up being extremely easy to guess, and are made public.

"Companies using Box Enterprise get their own sub-domain, and documents saved on Box can be shared to anyone with the unique URL," Adversis said in its write-up of the issue on Monday. "Users can also name the shared link to whatever they choose. Unfortunately, the sub-domain, URL, and folder names are easily brute-forceable. You can see where this is going."

Specifically, the URLs take the format https://<companyname>.app.box.com/v/<file/foldername>, allowing miscreants to guess files and folder names and spy on big businesses, if the links are set to public.

"After identifying thousands of Box customer sub-domains through standard intelligence gathering techniques," Team Adversis explained, "and using a relatively large wordlist, we discovered hundreds of thousands of documents and terabytes of data exposed across hundreds of customers."

"On one hand this issue is worse than the S3 bucket issue because finding a company's Box account is fairly easy, unlike with S3 bucket names which can be long and difficult to guess," noted Adversis. "On the other hand, employees seem much less likely to store full databases in Box."

Problem shared is a problem... doubled

Box does allow customers to turn off the shared public link options, allowing only selected users to view linked documents, and replace the custom URLs with auto-generated addresses that would be much more difficult for an attacker to guess. Indeed, URL sharing is private by default, and not public.

So it is entirely possible and easy to share URLs to Box-hosted files without accidentally spilling the data into the wrong hands.

Box said it recommends companies only use the custom URL option when they have a set of files they deliberately want to share with as many people as possible.

"The 'Custom Shared Link' feature is a means of changing default secure shared links to more easily discoverable, user-defined web addresses," Box explained. "This feature is intended to be used only for content that customers are looking to make easily accessible to large groups (publicly or privately) using a customized URL."

Not everyone appears to be following this advice, however. Adversis said rooting out confidential data was trivial. "In the first couple days of a running a non-aggressive scan, we had thousands of files and terabytes of data from dozens of companies," the bug-hunters noted. "A lot of the data was indeed public information or simply marketing material, but a considerable amount was sensitive." ®