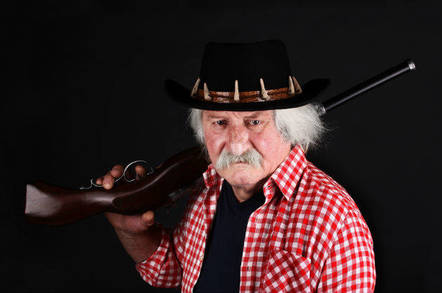 Video Google has just completed a year-long test program for a drone delivery system in Australia – and has applied to launch the world's first commercial delivery drone operation this summer, Down Under. However, the locals aren't pleased.

The folks who lived under the Project Wing trial program, held in the Canberra suburb of Bonython, absolutely hate the autonomous flying machines, and have set up a community action group to stop others from having to deal with the noise and disruption.

They claim to have been driven to the point of tears, residents have complained to local government officials, and some have threatened to start shooting the drones down if Google doesn't go away.

Google (well, Alphabet) set up Project Wing in Bonython last year and used its drones to deliver everything from coffee to burritos to prescription medication and baked goods. It encouraged local companies to sign up to the service and the project was seemingly such a success that Google now wants to roll it out commercially.

The idea of having items flown directly to your home has some appeal: it can be done extremely quickly, or timed far more accurately, and you don't have to go anywhere to pick it up. But those who have actually experienced the service have found it comes with significant disadvantages.

"Noise is the number one issue from the drones," says the Boynthon Against Drones (BAD) group that has grown up to oppose the plans. They note:

In fact, a NASA study [PDF] in 2017 found that the distinctive high-pitched whine made by drones is intensely irritating to people – far more than road traffic. The BAD group also notes that houses simply aren't designed to deal with noise from above, so the whining sound is particularly penetrating. Their quality of life is being "severely disrupted," they complain, highlighting "distress and sheer anger about the constant noise."

The Aussies also fear that the noise will only get worse as more companies sign up to the service. And they claim it's not just humans that can't stand the sound.

"The bird life throughout the local nature park and around the suburb has significantly decreased since the drones have been operating," the group notes. The program is literally replacing bird sound with giant flying vacuum cleaners.

Dogs also hate the drones. "They are spooked and agitated by the drones constant flying overhead," BAD notes, adding that: "Neighbours are complaining because of the dogs barking continually on flight days."

"It is disturbing the peace and quiet of the suburb as well as that of the nature park," they note, adding that "outdoor entertaining, gardening, walking around the suburb was once peaceful but there is now the constant sound of drones flying on service days."

Adding to the frustration is the fact that Google doesn't appear to be very comfortable with responding to criticism. Second in their complaints after the noise is residents' "frustration of not getting definitive answers from anyone regarding the drone trial" and they note that "there is nowhere to genuinely and transparently voice concerns about the trial."

And it was that inability to raise concerns that sparked the community action group. Fed up with being railroaded by a giant corporation and local officials who claim that it's important to stay ahead of technology, locals banded together and have been attending meetings and talking to Australian media outlets to make sure their concerns are heard.

The drones are not like ones you may have seen in shops – they are five-feet across and very sturdy. They can safety carry up to 1.5kg while zooming along at up to 120kph (75mph).

Google argues that drone delivery is a panacea: it is much more environmentally friendly than delivery trucks; it is extremely convenient; and makes people's lives better.

"So far we’ve seen that the hundreds of testers who’ve participated in the trials love the convenience of our service," the company claims, saying that 93 per cent of testers are "very or extremely satisfied with our service."

The program is "bringing items quickly to people when they need them the most… has made their lives easier and given them greater choice: choice not to load sick children into the car to pick up something from the chemist, choice to have bread delivered at a moment’s notice for school lunches, and choice to have a weekly treat - coffee, scones, burritos - without ducking out to the shops." It is also a godsend to elderly and disabled people, Google argues.

But what about the noise?

Google argues that "our drones are quieter than a range of noises you would experience in a suburb" while acknowledging that they make "a unique sound that people are unlikely to be familiar with."

It has been forced to recognize that people in Boynthon are not happy however: "Residents in our most recent trial area have asked that we improve the sound of our drone, and in response to that feedback, we’re developing new, quieter and lower-pitched propellers for our drone."

Google also says it has changed its delivery flight paths and slowed the drones down so they don't make as much noise.

But to Boynthon residents, Google is simply pushing ahead despite their complaints. They have delivered a petition with over 1,000 signatures to the Canberra government at the end of last year asking it to terminate the program so they could have a peaceful holiday period and set up a parliamentary inquiry.

But government officials stonewalled, claiming that since it hadn't received any "adverse aviation safety reports" that it was not able to halt the trial. Google responded by promising not to fly any drones over the Christmas to New Year period.

Last week, Google shut down the program, claiming that it always intended to just run one-year of testing. And government officials are still defiant in the face of growing criticism.

"Our choice is are we involved, are we trialling, are we engaging, are we finding ways to make this technology work in a way that benefits people, or are we just going to sit back and let it happen?" said the Canberra government's chief minister Andrew Barr in a recent interview to a national news outlet ABC. ®