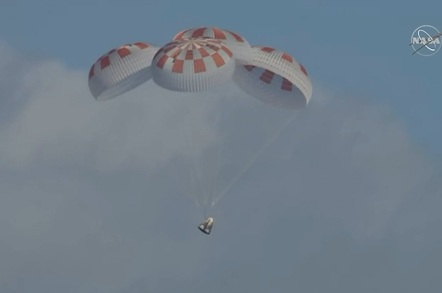 The mission, dubbed Demo-1, kicked off just under a week ago with the launch of the crew-capable Dragon capsule aboard a Falcon 9 booster, and subsequent docking the following day.

The hatch of the Crew Dragon was closed at 17:39 UTC on 7 March, leaving only the spacesuited, instrumented mannequin Ripley inside the capsule – as well as a limited amount of cargo to be returned to Earth. Like its freighter counterpart, the Crew Dragon can bring supplies back from the ISS (although not quite so much – its priority is cargo of the talking variety, of course).

Plush toy fans will be delighted to learn that the cuddly planet Earth that hitched a ride into orbit aboard the spacecraft will remain on the outpost, keeping 'nauts company during their long missions.

At least until the first crewed Dragon makes an appearance to bring "Earthy" home.

After five hours of free flight, SpaceX controllers jettisoned the unpressurised trunk of the spacecraft before firing the final 15 minute, 25 second deorbit burn, committing the Crew Dragon to a return to Earth. The trunk contained the solar panels to power the spacecraft as well radiators to dump excess heat.

The burn itself kicked off on time, at 12:53 UTC, shaving a critical few hundred miles an hour off the Crew Dragon's speed ahead of a splashdown, nearly 50 years to the day since Apollo 9 returned to Earth.

The nose cone of the Crew Dragon was closed once the burn completed, unlike the cargo version, which jettisons its own covering during launch.

At 13:33 UTC the Crew Dragon reached Entry Interface, the point when the spacecraft re-enters the atmosphere.

After a bowel-loosening few minutes while the capsule streaked through the atmosphere, the drogue chutes popped out at 13:41 UTC. Signal from the spacecraft had been picked up a few minutes before, earlier than expected.

The four main parachutes followed less than a minute later. By 13:45 UTC the Crew Dragon was bobbing around in the ocean, awaiting collection by the recovery vessel "Go Searcher" stationed nearby.

It marks the end of a highly successful and long-awaited debut of a crew-capable vehicle for the US, nearly eight years after the last Space Shuttle touched down.

Unlike the first Dragon freighter, the Crew Dragon will not be hung up like a trophy at SpaceX HQ. The company plans to crack on with refurbishing the thing before sticking it on top of another Falcon 9 in April to demonstrate the in-flight abort capability of the system.

Should that mission go well, the next flight of the Crew Dragon will include humans. And maybe another plush toy or two. ®