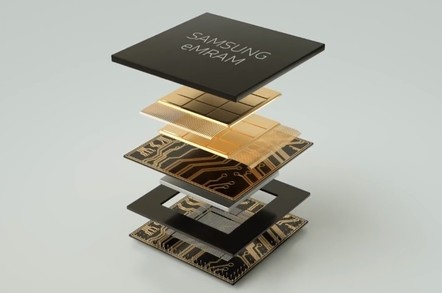 NAND flash memory is increasingly unable to meet today's embedded controllers' speed and density needs. There is no Optane-class technology for this particular industry, and so Samsung has been developing non-volatile random-access eMRAM to scratch an itch in this space.

The Samsung eMRAM is built with a 28nm silicon-on-insulator (FD-SOI) process technology called 28FDS. It is a resistive memory: if a binary bit cell has high resistance, it contains a 1, and low resistance stores a zero.

The resistance is defined by setting the magnetic north-south orientation of two ferromagnetic electrical films that are separated by a very thin barrier, an arrangement that forms a magnetic tunnel junction. Seeing as the orientation affects the junction's resistance, it therefore affects how much current can flow across the junction, which is sensed as the cell's binary value of 1 or 0. A Samsung Foundry video sketches this out:

The eMRAM supposedly uses only four-hundredths of the write power needed by eFlash, has 1,000x faster write speed, and provides better endurance. The tech is in its early stages, as Samsung doesn't expect to tape out a 1Gb eMRAM test chip until later this year.

Embedded CPU designer Arm is developing the necessary glue to add Samsung's 28FDS eMRAM storage to system-on-chips. We're told eMRAM can be integrated into existing semiconductor processes with as few as three additional masks, while eFlash requires more than than 12 additional masks at 40nm and below.

It means eMRAM can be integrated with future Arm-based CPUs, GPUs, and other processing cores in a system-on-chip. Arm's eMRAM compiler can generate instances to replace on-die flash, EEPROM and SRAM memories, and this, Arm said, is suited to cost and power-sensitive IoT applications.

Samsung said it will move its eMRAM to an 18FDS process (18nm) in the future.

El Reg thinks that if Samsung's eMRAM is successful, the door is open to Samsung creating MRAM non-volatile DIMMs (NVDIMMs) as an alternative to Intel's Optane NVDIMMs.

Everspin is involved in the MRAM NVDIMM area as well. It started shipping pre-production customer samples of its 28nm 1Gb Spin Torque Transfer Magneto-resistive Random Access Memory (STT-MRAM) in December 2018. We could see Everspin MRAM NVDIMMs appear before the end of this year.

El Reg has been told by Pure Storage that it is looking favourably at the developing MRAM technology area.