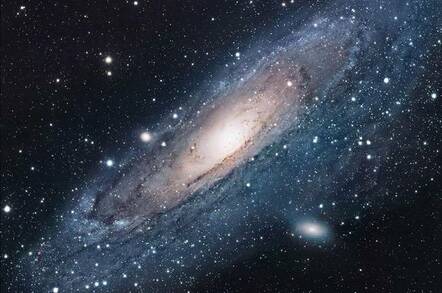 NASA and the European Space Agency have teamed up to attempt to answer what seems like an impossible question: what is the mass of the Milky Way?

The topic has been bugging scientists for a while, and it's a useful figure to know because it's needed in simulations of galaxies and of our galaxy within the universe.

Previous estimates vary wildly from 500 billion to three trillion solar masses. The latest answer claims to be the most accurate estimate yet, placing the Milky Way somewhere in between at 1.5 trillion solar masses, a healthy number for most galaxies with the same brightness.

“Not knowing the precise mass of the Milky Way presents a problem for a lot of cosmological questions," said Roeland van der Marel, a researcher at the US-based Space Telescope Science Institute, on Thursday.

“We want to know the mass more accurately so that we can put it into a cosmological context and compare it to simulations of galaxies in the evolving universe."

How's this for sci-fi: A cosmic river of 4,000 stars dazzles lifeforms as it flows through a galaxy

Estimating the mass of the Milky Way is tricky because most of the matter it contains is invisible. About 10 per cent of the mass that can be seen is locked up in 200 billion stars, and swirling clouds of interstellar material and dust. A tiny, tiny fraction is the monstrous supermassive black hole at the center of the galaxy, coming in at four to five million solar masses, plus the stuff like the planets, and you and I. The remaining 90-odd per cent is dark matter.

“We just can’t detect dark matter directly,” said Laura Watkins, a researcher working at the European Southern Observatory in Germany, who led the team performing the analysis. “That’s what leads to the present uncertainty in the Milky Way’s mass — you can’t measure accurately what you can’t see.”

To estimate the overall mass, the researchers analyzed data obtained by the ESA’s Gaia satellite on 34 globular clusters – clumps of hundreds of thousands of stars that orbit the galaxy's spiral disk – plus 12 distant clusters studied by the Hubble space telescope. The speed and movement of these clusters can be used to estimate the total mass of the Milky Way.

“The more massive a galaxy, the faster its clusters move under the pull of its gravity,” explained Professor Wyn Evans, of the University of Cambridge in England. “Most previous measurements have found the speed at which a cluster is approaching or receding from Earth, that is the velocity along our line of sight. However, we were able to also measure the sideways motion of the clusters, from which the total velocity, and consequently the galactic mass, can be calculated.”

The results will be published in a detailed paper in The Astrophysical Journal. ®