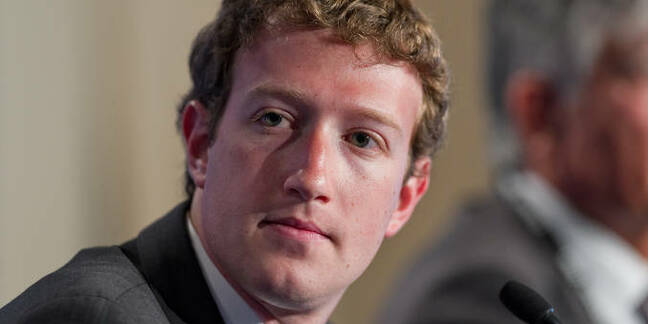 We have obtained a transcript of a secret crisis meeting held last week between top executives at Facebook, including CEO Mark Zuckerberg and COO Sheryl Sandberg, hammering out a corporate response to the social network's non-stop rollercoaster of scandals. We present it here unedited.

Mark Zuckerberg: Hi everyone. So the reason I wanted us all here was to… so, last week, as you know, I gave an interview to some Harvard Law professor. So we all thought this was a good idea because he's not a journalist and wouldn't ask precise questions.

So I thought it went pretty well. But then I read coverage of it and it all centered on me not knowing about some product we have that has a camera in it, and it sits in people's lounges. So this headline reads: "We don't want a camera in everyone's living room, says bloke selling cameras in living rooms..."

Unknown exec: You mean the Portal?

Zuckerberg: That's it: Portal. I'd never heard of it. When I got back here, I asked someone to get me one: it's like some cut-price iPad. I don't understand. We're a software company – why are we trying to sell hardware? How many have we sold of them anyway?

Unknown exec 2: We're on schedule to hit our sales targets.

Zuckerberg: Wow, that bad? Why don't we just scrap this thing, and I can get back to making my argument about not wanting a camera in everyone's living room.

So, that's settled, then. Kill this Portal. Yes? Agreed?

Sheryl Sandberg: I think that's a wise decision, Mark, but maybe let's not rush it. Perhaps we can undertake an internal review. There are some potential crossovers with the Portal and our core revenue drivers.

Sandberg: Well, as you know, we recently made a commitment to allow people to limit Facebook's ability to interact with the microphone in their smartphone.

Zuckerberg: Yes, but it doesn't actually turn it off.

Sandberg: No, that was the previous commitment. The new commitment is a little more stringent.

Zuckerberg: You mean someone can actually stop us from listening to them?

Sandberg: Well, if they hit a precise combination of disjointed privacy settings then yes, it's possible. There are already guides on YouTube.

Zuckerberg: So when is our next settings refresh due?

Unknown Exec 3: We're ready to go now. Stats show six per cent of users have already cut full microphone access. We typically wait for it to hit 10 per cent before activating Operation Square One.

You know, shuffling the settings around until it's all conveniently switched back on again. Microphone, location...

Zuckerberg: OK, all right! Thank you. Now that brings me to a bigger concern: our public image. As you know we take our users' privacy very seriously…

Zuckerberg: But there is a perception that we are not doing enough or that we don't have our users' best interests at heart. No, no, don't try to tell me otherwise, I looked on Twitter.

While I don't expect people to fully understand that what's good for Facebook is good for them, I think we should try a little harder to remind them of all the great things that people do on our platform, and not just the stuff we do to make money from it.

So, let's have an open ideas sessions – throw out anything, stuff that is good, stuff that people use Facebook for, stuff we can start promoting, and get away from all this personal data distraction. Come on, anyone…

Zuckerberg: Cancer?! Are you serious? No one likes cancer.

Sandberg: Hold on a second, Mark. I like it. Cancer. All those people with cancer telling loved ones. Sharing their thoughts and supportive messages. People struggling. Just imagine: a top female executive, she has it all, but someone close to her – not her, obviously – but someone close to her, gets cancer. And she's there for them, and learns and grows from the experience. Maybe she writes a book about it. I don't think anyone's ever written a book about cancer before.

Sandberg: No, I've got it! Someone discovers they have cancer through Facebook – they complain about their symptoms and friends say "hey, you might have cancer" and they go to their doctor – and they are saved! All thanks to Facebook. Come to think of it, I am pretty sure now that that is exactly what happened to a Facebook friend of mine. Yes, that's exactly what happened.

Zuckerberg: Fine, you can have cancer. What about me?

Unknown Exec 2: Something about encryption?

Zuckerberg: Yes, yes, we are. We are making people's information safer by encrypting it. So that only users and their friends... and friends-of-friends... and apps, completely harmless apps... and perhaps the whole world – and us, of course – can actually read it. No, hang on, that doesn't work –

Unknown Exec 3: Maybe they don't read it. Maybe it's private communication. Facebook is helping people communicate privately like never before – and securely.

Unknown Exec 3: Don't forget about vision – you're always so generously reminding us that you're a visionary.

[gestures wildly at the window]

certainly have no idea what it is, but it's brilliant. In fact, it's the future.

Unknown Exec 4: Sorry to jump in here, but I'm worried about clarity of messaging. I believe we had a strong vision of the future two years ago where Facebook was the center of a global community, building a social infrastructure.

Zuckerberg: No, that was the future in 2017. The future now is the not-that. Everything is private. Yes. People's private thoughts sent privately to one another. And we'll take the metadata from their messages and pair advertising with it. Brilliant.

Unknown Exec 4: While we're talking about what we can do, we're getting killed in Washington over this thing where we were perceived to be lying…

Zuckerberg: Oh, the targeting kids with a VPN thing; don't worry about that, we sent a letter to Senator Warner weeks ago.

Unknown Exec 4: No, actually, it was the…

Zuckerberg: Location data? Don't worry, we changed the settings in the last…

Unknown Exec 4: Actually, I was trying to…

Zuckerberg: Corporate access to private messages? They won't go hard on that, everyone does it…

Unknown Exec 4: Well, what I really…

Zuckerberg: So just tell me what you need.

Unknown Exec 4: OK, sure. Well, the two things everyone in DC hates right now are China and intellectual property infringement. So if we could do something about that. Anything really.

Sandberg: Got it. Chinese companies and trademark infringement. Leave it with me.

Zuckerberg: So, I think that wraps everything up? Any other problems?

Zuckerberg: We're still dealing with that? So, let's announce some kind of clampdown. Any ideas for topics?

Zuckerberg: Perfect. So, some kind of clampdown on vaccine misinformation. We'll nip that in the bud. Take care of it right away, before it gets out of hand. Stop it dead, before anything bad can happen.

I mean, it doesn't really matter what it is we're doing exactly, anyway, because no one can tell if we do anything at all: the site's so damn big.

Oh, and I nearly forgot. We're ready to launch Dark Mode in Messenger. I'm very excited about this one. And just to make it more fun, people have to send a specific emoji to make it turn on. Guess which one, guess which one…

Zuckerberg: No! That would make it brighter. Try again, try again…

Zuckerberg: No, come on try harder!

Zuckerberg: Sheryl, you know that one was rejected months ago. No, it's the moon emoji! I love emojis. And dark modes. And coding. I wish I could go back to coding. I miss coding. ®