3D glasses required... or you can try squinting at the screen 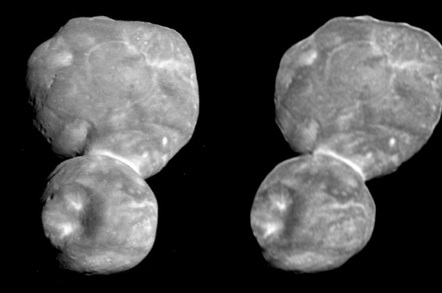 While most eyes were on this week's SpaceX shenanigans (spoiler: the Crew Dragon returned to Earth OK) the New Horizons mission combined images taken at slightly different viewing angles to create a "binocular" effect.

The images themselves came from the probe's Long Range Reconnaissance Imager (LORRI) from distances of about 28,000km and 6,000km. The gang paired the processed images to create the 3D effect.

While the images taken at 6,000km out afforded a resolution of 33 metres per pixel, the image quality is lower than the earlier set due to a shorter exposure time. The gang, however, reckons that this remains the best stereo view yet of Ultima Thule.

As has become the norm, the team is positively squeaking with excitement at the new imagery. Deputy project scientist John Spencer said: "We have been looking forward to this high-quality stereo view since long before the flyby." Looking at the object in 3D will give scientists a better understanding of the decidedly odd shape of the body.

NASA says New Horizons' next stop might have a moon

Remember that 747 with an open door and a telescope? It spotted a moon-esque blip

Kuiper-belt-bound craft needs a few weeks of tweaks to prepare for Space Duck 2.0

Close Encounters of the Kuiper Belt kind: New Horizons to come within just 3,500km of MU69

Probe skipped past Pluto by 12,500km, so this rock needs to prepare for its close-up

Roundup Also: Is that an aerospike in your pocket or are bells more your thing?