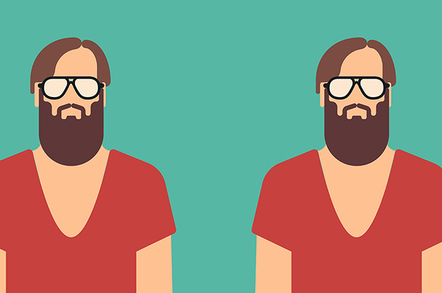 Normally a headline like "The hipster effect: Why anti-conformists always end up looking the same" would elicit much rolling of eyes here at Vulture Towers.

However, it becomes more intriguing when one learns that the hypothesis described in the article was tested by a series of hilarious post-publication events that then further bolstered the paper's findings.

At the end of February, MIT Technology Review emitted a pithy rundown of a 34-page research paper from maths-modelling boffins at Brandeis University in the US; the paper essentially posited that in a bid to make that all-important "countercultural statement", hipsters can end up looking alike. For groovy models of how random acts by hipsters "undergo a phase transition into a synchronized state" – along with some knotty network equations – see here [PDF].

Accompanying the article was an edited stock image of a generic millennial chap in plaid shirt and standard-issue beanie, or "trendy winter attire", as Getty put it.

The MIT journal's editor-in-chief, Gideon Lichfield, took to Twitter to tell a "cautionary tale" about what followed the article going live:

"We promptly got a furious email from a man who said he was the guy in the photo that ran with the story. He accused us of slandering him, presumably by implying he was a hipster, and of using the pic without his permission. (He wasn't too complimentary about the story, either.)"

Now, as far as I know, calling someone a hipster isn’t slander, no matter how much they may hate it. Still, we would never use a picture without the proper license or model release. It was a stock photo from Getty Images. So we checked the license. https://t.co/uFPXXNlEid

He said the licence stipulated that if the image was used "in connection with a subject that would be unflattering or unduly controversial to a reasonable person (for example, sexually transmitted diseases)", it had to be made clear that the person was a model.

Lichfield pointed out that he didn't think calling someone a hipster was "unflattering or unduly controversial" but contacted Getty to be safe.

The stock photo giant checked the model release and lo! The guy in the image wasn't even the same dude who was complaining. "He'd misidentified himself," Lichfield said.

"All of which just proves the story we ran: hipsters look so much alike that they can’t even tell themselves apart from each other."

Boom. Thirty-four pages of theory proven in a brief round of email tennis. Your move, hipsters. ®

I see the red team and I want it painted black