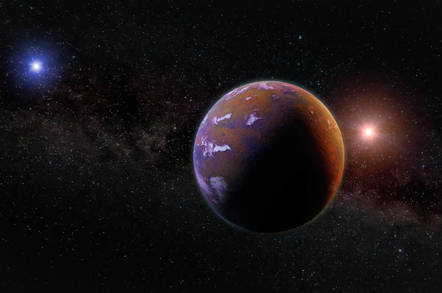 Stars whizzing by planets can wreak havoc by knocking their orbits out of place or kicking them out of their systems entirely, according to a paper published in the Astrophysical Journal.

The conclusion could explain how bizarre objects like the spliff-shaped asteroid ‘Oumuamua ended up being flung into our own Solar System.

First, a pair of astrophysicists from Stanford University and the University of California, Berkeley, in the US, studied a star system, codenamed HD 106906, located a mere 300 light years away from Earth. At just 15 or so million years old, it’s a very young system. It caught the duo’s attention because of one of its planets sticks out like a sore thumb.

“One of the mysteries arising from the study of exoplanets is that we see systems where the planets are misaligned, even though they are born in a flat, circular disk,” said Paul Kalas, co-author of the paper and an adjunct professor of astronomy at UC Berkeley. “Maybe a cosmic tsunami hit these systems and rearranged everything about them, but we haven’t had proof."

Is it a bird? Is it a plane? Is it a giant alien space cigar? Whatever it is, boffins are baffled

The “cosmic tsunami” scenario described in the paper, published late last month, involves HD 106906 b being ejected out of its own star system by flying too close to its parent binary stars. It was rescued and nudged back to orbit, however, by another pair of stars passing by.

Their ideas are supported by observational data gathered from the European Space Agency’s Gaia spacecraft. The boffins studied 461 stars nearby to HD 106906 to work out their distances, positions, and motions over time, and found that another star system also containing a binary star system once passed HD 106906 b close enough to kick it back into place albeit at a weird angle.

“What we have done here is actually find the stars that could have given HD 106906 b the extra gravitational kick, a second kick so that it became long-lived, just like a hypothetical Planet Nine would be in our solar system,” Kalas said.

The researchers believe that these strong gravitational kicks passed on by stellar flybys could also explain the presence of the Oort cloud, a shell of distant icy remnants, and the alien visitor ‘Oumuamua in our own Solar System.

“Studying the HD 106906 planetary system is like going back in time to watch the Oort cloud of comets forming around our young sun,” Kalas said. “Our own giant planets gravitationally kicked countless comets outward to large distances. Many were ejected completely, becoming interstellar objects like ʻOumuamua, but others were influenced by passing stars.

“That second kick by a stellar flyby can detach a comet’s orbit from any further encounters with the planets, saving it from the prospect of ejection. This chain of events preserved the most primitive solar system material in a deep freeze far from the sun for billions of years.” ®