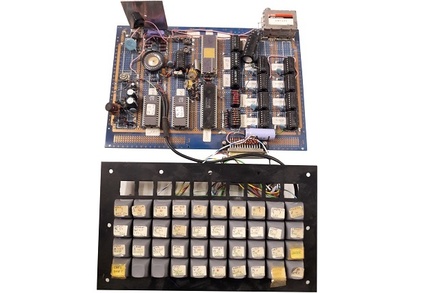 The Saints of Silicon at the Centre for Computing History have got hold of the original build of Sinclair's ZX Spectrum, courtesy of Kate and John Grant.

Grant, who also worked on the guts of Sinclair's ZX80 and ZX81 (and can be heard talking about his experiences in Randy Kindig's Floppy Days podcast), donated the prototype hardware to the museum.

The hardware had been in the possession of Nine Tiles, a company responsible for the BASIC ROM in the ZX80 and ZX81 and called upon to provide the new BASIC for Sir Clive's new colour computer. Judging by labels on the ROM chips, the computer dates from around July 1981.

Dominated by the Z80A CPU, the board lacks a case, a reflection of its prototype nature, but features much of the chippery that would go on to form the guts of the ZX Spectrum. The layout, of course, differs and the machine lacks the socket required to connect a cassette recorder. Instead, audio cables have been hardwired into the board.

The keyboard connector also differs, with a substantial connector in place of the flimsier flex affair that would bedevil production machines. The keyboard itself also features full-travel keys, something doubtless sacrificed on the altar of cost and design, but would have been welcomed by users. Gloriously, the functions are noted on handwritten labels and match those printed on the final rubber incarnations.

Received rather late in the day by Nine Tiles and so little used, the prototype also features a splendid amount of wire-wrap and gives an insight into the design processes of the day.

Steve Vickers, who joined Nine Tiles in 1980, worked on the BASIC for the machine, having adapted the ZX80 firmware for the ZX81 and added floating point maths among other things. Richard Altwasser at Sinclair Research was tasked with the hardware.

The duo would eventually leave their respective companies to launch their own computer, the Jupiter Ace.

The Register had a chat with museum curator and CEO Jason Fitzpatrick, who told us the hardware had been fired up at some point in the past, and that the museum hoped to bring it back to life in the coming weeks, if the silicon cooperates.

Fitzpatick said: "We'll first dump the ROMs, preserving any data left in them. Then we'll check out the circuit and make sure it is electrically sound - we will remove the chips and check the voltages to ensure there will be no damage."

If all is OK, the team then will have a crack at seeing if the prototype works. Not that there is an awful lot one can actually do with a 16k ZX Spectrum.

Regardless of what happens with any switch-on, the hardware will be on display "within the next two weeks" at the museum. It'll be unpowered, but the gang has plenty of Sinclair hardware on hand for those who fancy a bit of retro goodness.

And the value? In world where a working Apple 1 board can fetch $350,000, it's difficult to put a price on the one-off. Fitzpatrick remarked "It's in the eye of the beholder."

As for the eventual ZX Spectrum itself, it would launch in April 1982 with unfinished firmware and a BASIC ROM that could charitably be described as lethargic. A plan to ship an upgraded ROM was dropped due to the popularity of the thing, with the finished firmware shipping on peripherals, ready to take over from the Spectrum’s incomplete ROM when needed.

In the meantime, here is Adrian Page-Mitchell and Philip Searle of the museum getting to grips with a bit of historic home computer gear to warm the hearts of nerds of a certain age. ®