'If someone like me can't get in to give a keynote, perhaps it's time we rethink where we organize our events' 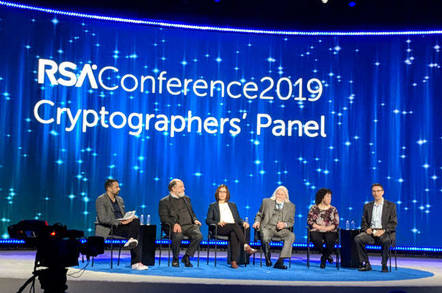 RSA Adi Shamir, the S in the RSA encryption system, didn't take his usual place on the Cryptographers' Panel at this year's RSA Conference in San Francisco – because he couldn't get a visa from the US government. And he's not alone.

Shamir – the 2002 Turing Award co-winner and a member of the US, French, and Israeli Academies of Sciences and Britain's Royal Society – lives in Israel, and applied for a US visa two months ago to attend the information-security conference. The RSA Conference is the largest of its type in the world, and is taking place this week in California. Shamir, along with Ron Rivest and Leonard Adleman, invented the widely used RSA cryptosystem, and cofounded RSA Security, which has been running the RSA Conference since 1991.

Shamir usually attends the USA event each year to speak on a panel with fellow cryptographers. However, he heard nothing back about his visa application this time around, and so is stuck at home.

"I've been left in total limbo," he told the conference via video link this morning. "If someone like me can't get a visa to get a keynote, perhaps it's time we rethink where we organize our conferences."

He and other panelists pointed out that he was far from alone in this. Over the past few years, security researchers have found it increasingly difficult to enter America legally for conferences, though this year, possibly as a result of President Trump's partial federal government shutdown temporarily putting the bureaucracy on ice, the problem is much worse, with countless visa applications stuck in a backlog.

Rivest, Shamir's long-time colleague and the R in RSA, was visibly fuming over the blocking of his friend. Rivest said he would be writing to his senator and House reps to protest, and he urged the thousands of conference attendees to do the same.

"It's embarrassing to be a Yankee some days," sighed the crypto-boffin.

The US government wasn't the only organization taking flack from the experts in cryptography: the Australian government also received a verbal flaying for its new law requiring communications service providers to install surveillance backdoors in their software to allow cops and spies to secretly listen in on private chatter. Oz political leaders had insisted the laws of Down Under overrode the mathematical laws of cryptography, suggesting therefore it was possible to somehow introduce peepholes into strong encryption just for government agents without completely undermining the crypto.

"Australia has given us the lovely quote that the laws of mathematics are all well and good, but the laws of Australia apply in Australia," crypto-guru Whitfield Diffie said, with a grin. "If you extend this to physics they could ban fission and ensure they are safe from nuclear weapons, or ban certain chemical reactions and solve their global warming problem. It's a step that isn't going to be productive."

He said corporations will probably comply with Australia's new rules and introduce wiretapping points to their products, though smaller folks rolling their own end-to-end encrypted systems – like, say, terrorists, probably won't. Ultimately, he said, he'd like to see personal privacy not touched by legislation.

200 years ago, he said, people had more privacy than anyone does today. But with computer brain interfaces looming, he believed our personal thoughts could be up for grabs to anyone with a court order.

Overall there was optimism that the world was heading in the right direction on some topics. Election systems are getting hardened, crypto systems are getting stronger, and vendors were getting the message that security is vital. It's clear governments aren't helping, in more ways than one. ®