Just nothing too recent, OK? 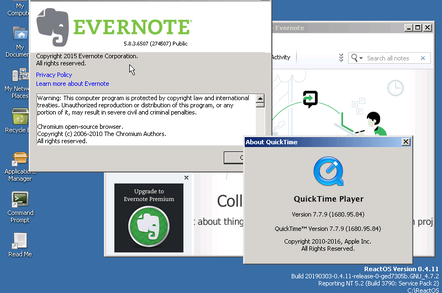 Heading back to a reverse-engineered future

Those keen to indulge in a bit of open-source Windows in the form of ReactOS will be delighted to learn that there is a raft of improvements in the latest version.

We last looked at the project in July 2018 and came away impressed by the nostalgia factor of running what resembles Windows 9x, if still a little confused by the point of it when the Windows apps it was created to run decades ago have mostly been superseded by the modern Linux platform.

However, as with many a mountaineer replying "because it's there" to the inevitable "why?", the team behind ReactOS has continued chipping away at the Windows API to create a reverse-engineered NT kernel, free of Microsoft's code.

Yesterday's 0.4.11 release brought some substantial improvements in the storage department, stomping on a "major memory leak problem" with the driver used for BTRFS support. An incompatibility with the UniATA driver with the AHCI SATA controllers that accompany the 6th generation Intel chips (Skylake) has also been dealt with.

Usefully, progress has been made toward supporting manifests, used for pointing the OS to which DLLs an application requires in order to run. This functionality wasn't supported well in previous versions which was, as the team acknowledged, "a very glaring hole".

While there remains work still to do, support for manifests is considerably improved this time around, to the point were the likes of Blender 2.57b, Evernote 5.8.3 and even the last released (and now unsupported by Apple) version of QuickTime for Windows, 7.7.9, works.

We obviously had to give it a go and fired up a Hyper-V session (other virtualization technologies are available) to install the ISO. As with many Linux distros, users can run ReactOS direct from the ISO image, but we opted to install and spend some time in the delightful retro setup screens before being deposited in the NT4-esque world of ReactOS in a matter of minutes.

The team has made efforts to implement the ability to upgrade an existing installation of ReactOS, just like other modern operating systems, but it is very much a work in progress at this stage.

While compatibility is improved this time around, some tinkering is still required to persuade the thing to talk to the network while in a Hyper-V session (likely more down to Hyper-V than ReactOS), but once configured we found the OS worked as advertised. QuickTime ran as expected, once we'd realised we needed to tell ReactOS which version of Windows to behave like – QuickTime gets stroppy if not run on Windows 7 or Vista.

The whole OS simply felt considerably more robust than the version we tried last year, much of which is down to improvements in the Win32 subsystem. The effort invested by the team is evident in its stability.

However, our original conclusion still stands. While an undeniably impressive feat of engineering, ReactOS has limited usefulness right now. Open-source fans can get their kicks on Linux. Windows compatibility, although improved, struggles when presented with something like a recent-ish .NET Framework – .NET 4.0 works, .NET 4.7.2, not so much. Newer versions of Office are right out.

And if you're worried about telemetry capture, Microsoft's latest and greatest won't be for you anyway. ®