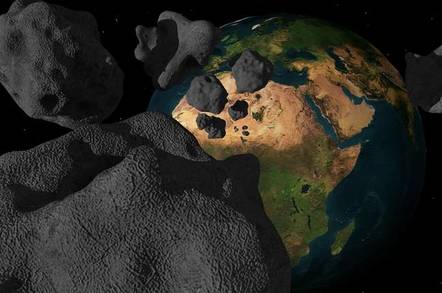 Videos Giant asteroids are harder to destroy than previously thought, according to fresh research out this month.

“We used to believe that the larger the object, the more easily it would break, because bigger objects are more likely to have flaws,” explained Charles El Mir, first author of the study and a PhD graduate at Johns Hopkins University (JHU) in the US. “Our findings, however, show that asteroids are stronger than we used to think and require more energy to be completely shattered.”

Computer simulations, built by physicists and engineers at JHU, played out a scenario in which an asteroid 1.21 kilometres wide smashed into a 25-kilometre-wide target asteroid at 5 kilometres per second (0.74-mile-wide asteroid into a 15-mile-wide target at 3.1-miles-per-second).

Previous studies suggested the target space rock would fracture and break apart during the impact. According to this latest new model, though, as detailed in a paper in the March 15 edition of journal Icarus, the target asteroid survives the crash. The simulation is split into two parts: “A short-timescale fragmentation phase and a long-timescale gravitational reaccumulation phase.”

In the short-timescale fragmentation phase, the impact immediately creates millions of small cracks running throughout the rock. Tiny bits and pieces fall away like sand, leaving behind a small crater. Here’s a short clip of what that first stage looks like:

The leftover core has a gravitational field of sufficient strength, though, to pull that debris back into itself during the long-timescale reaccumulation phase. In other words, the impacted asteroid grows in size as the fragments return and stick back onto the core. Therefore, it would take a lot more energy than previously estimated to actually destroy asteroids of that size. Here’s what the second stage of the impact would look like:

“It may sound like science fiction but a great deal of research considers asteroid collisions,” said El Mir. "For example, if there’s an asteroid coming at Earth, are we better off breaking it into small pieces, or nudging it to go a different direction? And if the latter, how much force should we hit it with to move it away without causing it to break? These are actual questions under consideration."

KT Ramesh, co-author of the paper and a professor studying extreme materials at JHU, added: “We are impacted fairly often by small asteroids, such as in the Chelyabinsk event a few years ago. It is only a matter of time before these questions go from being academic to defining our response to a major threat.

"We need to have a good idea of what we should do when that time comes – and scientific efforts like this one are critical to help us make those decisions.” ®