SpaceX Crew Dragon: Launched and docked. Now, about that splashdown... 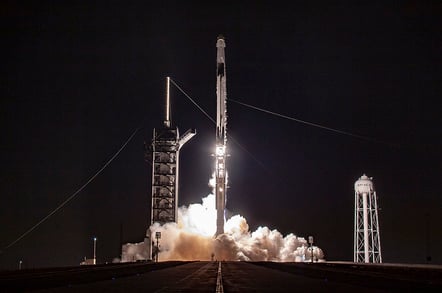 The colossally delayed first flight of SpaceX's crew Dragon got underway this weekend and stands at the two-thirds successful mark after docking with the International Space Station (ISS).

The launch, from the same launch pad that sent Apollo 9 into orbit almost exactly 50 years ago, occurred on schedule at 07:49 UTC on 2 March. The demonstration mission, dubbed Demo-1, carried only a spacesuited instrumented mannequin named "Ripley" and a micro-gravity indicator in the form of a cuddly planet Earth.

While no humans were aboard this time, the spacecraft is nearasdammit the same as the one that will launch a crew later this year, assuming the flight (and the subsequent abort test) don't throw up any unexpected nasties.

The lift-off itself followed the usual Falcon 9 model of launch, land, repeat. The first stage ignited on time at 07:49 UTC, and the 9 Merlin engines carried the stack past the tower, resplendent in fresh black cladding. A far cry from the red structure of the Shuttle and Apollo eras.

The engines cut off as scheduled at the 02:35 mark and the first stage returned to the drone ship Of Course I Still Love You, which is stationed in the Atlantic. The landing marked the 35th successful return for the SpaceX gang. The Crew Dragon separated from the second stage 11 minutes after launch to begin a day-long chase of the ISS prior to SpaceX's first crack at an autonomous docking.

Prior Dragon freighters (and HTV and the former Orbital ATK – now Northrop Grumman - Cygnus spacecraft) have all been berthed by the ISS crew with the aid of the Canadarm2. Russian spacecraft and ESA's ATV, of course, dispense with such frippery.

Star Trekking to a soft and hard docking

Like Russia and ESA, SpaceX's Crew Dragon does not require the use of the station's arm. The spacecraft instead made its own way to the ISS, something that left NASA's Russian partners a little jumpy in the event of the thing's computer failing.

In the event, the only failure appeared to be with Russian systems aboard the ISS, with a false alarm, unconnected to the arrival of the Crew Dragon, being triggered by the Elektron oxygen generator.

ISS got an alarm for a "catastrophic failure" in Elektron, the ISS's Russian Oxygen generators. There are backups. #CrewDragon

The Crew Dragon is, of course, a very different beast to the freighter that has been in use since 2012. At 4m wide and 8.1m high, the spacecraft is larger than its predecessor. It also lacks the pop-out solar panels of the earlier Dragon, with SpaceX opting to mount the components on the trunk. Another very important difference is the nose cone, which hinges to reveal the NASA Docking System (NDS).

The cargo-only Dragon uses the larger Common Berthing Mechanism (CBM) for docking, which is exposed with the jettison of the nose cone and lacks the flexibility of the NDS.

The NDS, which resembles to the APAS-95 mechanism of the Shuttle era (which itself has roots in the Apollo-Soyuz programme), relies on the International Docking Adapter (IDA), which SpaceX delivered in 2016. There were supposed to be two of the things attached to the ISS by now, but the first was lost when a Falcon 9 went foom in 2015.

The IDA is now attached to the Pressurized Mating Adapter (PMA-2) at the forward port of the Harmony ISS module. PMA-2 last saw service as a welcome mat for visiting Space Shuttles.

Station cameras spot the @SpaceX #CrewDragon as it approaches the orbital lab 266 miles above the Earth's surface south of Australia. #LaunchAmerica https://t.co/qpyi2LM11l pic.twitter.com/VyEbULl4kv

The conical Crew Dragon spacecraft, with docking mechanism visible, was sighted by 'nauts aboard the ISS early yesterday morning as the thing approached the ISS's "Keep Out Sphere" (PPT), a notional safety zone around the ISS. The spacecraft then edged closer to the orbiting outpost, pausing at 20 metre point before creeping in for a successful docking.

The ISS crew cracked open the hatch two hours later, venturing into the temporary addition to the station and ushering in a new era of transportation to and from the multibillion-dollar lab. It has been almost eight years since the last Shuttle left the complex and nearly 10 since a US vehicle brought up new crew to the outpost.

Two down, one to go. That difficult third album

While casual observers of the over-excited spurtings on social media would be forgiven for thinking that the achievement is mission-complete, there is still one major hurdle for SpaceX to overcome: actually getting the thing back to Earth. The Crew Dragon is due to depart the ISS on 8 March at around 07:30 UTC, before heading to a splashdown.

The spacecraft is obviously a different shape to the proven cargo Dragon, and during the post-launch press conference SpaceX CEO Elon Musk voiced concerns about the behaviour of the capsule during re-entry, stating that "the backshell is not symmetric" like the earlier Dragon, with the impact of the launch escape thruster pods potentially contributing to some instability during re-entry.

The SpaceX exec went on to say the company had run many simulations to prove the design, but we suspect some bottoms will be jolly squeaky at SpaceX HQ come Friday.

If successful, SpaceX will move on to an inflight abort test using the booster from a previous Falcon 9 launch. It could then stick a crew in the capsule as early as August. NASA would then have to decide when the first of its 'nauts could ride the Crew Dragon to the ISS for a crew change, ending the agency's dependency on its Russian ISS partners. For a few years, at least.

As observers pointed out, while a hugely impressive achievement on the part of SpaceX, the Crew Dragon is currently just another way to get to and from the ISS (which will almost certainly be a home for fish at some point within the next 10 years). Going further afield requires NASA's Orion capsule, which is still a year or so away from its first SLS flight.

Delays and politically driven rethinks behind NASA's SLS and Orion have been a thing to behold, eclipsing the tardiness of Demo-1.

However, with NASA Administrator Jim Bridenstine lauding the "strong bipartisan vote of confidence from President Donald J Trump and Congress" towards the end of last month, what could possibly go wrong? ®