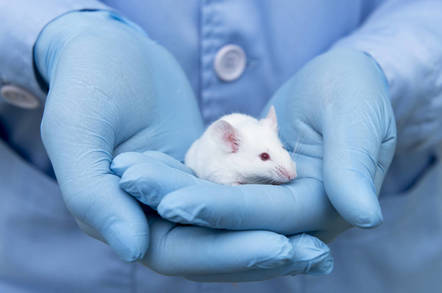 Did you know that a simple injection can give mice the power to see in infrared? Yeah, well us neither, until a research paper documenting the results of a bizarre experiment were published in Cell on Thursday.

Some species of snakes, frogs, and fish can see in infrared. Mammals, however, can only see visible light: the wavelengths below and beyond the ranges of about 380 to 740 nanometres in the electromagnetic spectrum are invisible to us.

“When light enters the eye and hits the retina, the rods and cones—or photoreceptor cells—absorb the photons with visible light wavelengths and send corresponding electric signals to the brain," explained Gang Han, co-author of the paper and an associate professor at UMass. “Because infrared wavelengths are too long to be absorbed by photoreceptors, we are not able to perceive them."

The nanoparticles in the injection, however, latch onto the photoreceptor cells and act as tiny transducers. When infrared hits these nanoparticles the wavelength of the light is shortened, converting the infrared into visible light that can be seen by the mice.

“In our experiment, nanoparticles absorbed infrared light around 980 nm in wavelength and converted it into light peaked at 535 nm, which made the infrared light appear as the color green," said Jin Bao, coauthor of the paper and an associate professor at the University of Science and Technology.

Murder in space: NASA orders astronauts to KILL cripples – then fire bodies back to Earth

So, technically, it’s just clever trickery, and the mice can’t actually see in infrared. But with the injection, they can perceive those signals when they’re converted to visible light. When the researchers shone infrared light into the furry creatures’ pupils, they constricted – a sign that their eyes were registering the light.

Next, they put the animals into a box. One end of the box was dark with no light, and the other side was bathed in visible light. The mice liked to spend more time in the comforting darkness. When the visible light was replaced with infrared, the mice that had been injected in the eyes detected this and avoided the brighter side.

It looks like their "infrared sight" is good enough to make out various shapes, too. In a third experiment, the researchers put them into a Y-shaped maze. The mice were trained to find a hidden platform that was associated with one or two specific patterns. The same patterns were projected onto one end of the maze using infrared light, and the bionic mice were able to find the hidden platform whereas the normal, plain mice could not.

What’s more interesting is that their super infrared vision lasted up to ten weeks with few harmful effects. “Endowing mammals with [near-infrared] vision capacity could also pave the way for critical civilian and military applications,” the researchers wrote in the paper. ®

Our thanks to Register reader Simon Zerafa for highlighting the research. You, too, can get in touch with us here.