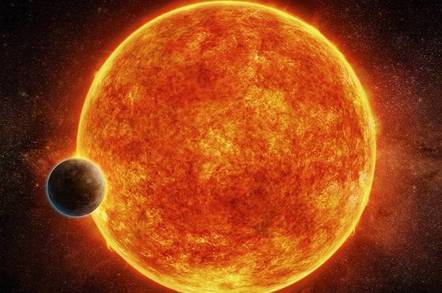 Majestic ... What the Sun looks like with a tiny planet near it in this completely abstract illustration

There is no sign of the Solar System's hypothetical “Planet Nine” yet – however, astronomers in America aren’t giving up, as they continue to find bits and pieces of evidence for its existence.

The idea that there could be more than eight planets on our cosmic street (shut up, Pluto) has been floating around for a while. Some distant objects beyond Neptune have strange orbits that could be the result of a mysterious special guest planet influencing their motion. Said alien world, dubbed Planet Nine, was proposed, spookily enough, roughly the square-root-of-nine years ago, though scientists haven’t managed to find it yet.

Now, coincidentally, nine astronomers (minus seven) from the California Institute of Technology (CalTech) have analysed whether the clustering of Kuiper Belt Objects circling the outer limits of the Solar System is due to a foreign body, like say Planet Nine, gravitationally tugging on them, or if their measured positions are purely the result of biased observations. According to these results published in a paper in The Astronomical Journal last month, the chance of the clustering occurring because of biases is only 0.2 per cent.

“Though this analysis does not say anything directly about whether Planet Nine is there, it does indicate that the hypothesis rests upon a solid foundation," said Mike Brown, coauthor of the paper and an astronomer professor at CalTech, on Thursday this week.

In another CalTech project in collaboration with researchers from the University of Michigan, Planet Nine’s mass has been narrowed down to more than that of nine Earths, making it a super-Earth. It also has a solar orbit 44.4-times-nine times larger than Earth’s – this new figure is smaller than previous estimates – so it may be easier to spot since it’s closer to the Sun and maybe brighter than previously thought.

Fred Adams, coauthor of a separate paper to be published in Physics Reports, believes there’s a good chance that Planet Nine will show up in the next nine to 14 years, plus one. If scientists fail to find it in that time, however, the theory can perhaps finally be laid to rest.

“Over the course of the next 10 years we will have deeper and deeper — which means more sensitive — sky surveys. So I think by 2030 we will have seen it or will have a better idea of where it is. Of course, it’s also possible that by then we could also have alternate explanations for the observed orbital anomalies,” he said.

The Solar System is massive, and no one is quite sure where the elusive planet really is, if it exists. Since it’s thought to be so dim and distant, it’s understandably difficult to find. “The presence of Planet Nine would beautifully and coherently answer several seemingly unrelated open questions about the solar system. I look forward to the day we either see it or rule it out so that we can conclusively answer these questions,” said Adams.

Konstantin Batygin, coauthor of the second paper and an assistant professor of planetary sciences at CalTech, called it “the solar system's missing link of planet formation,” adding: “Over the last decade, surveys of extrasolar planets have revealed that similar-sized planets are very common around other sun-like stars. Planet Nine is going to be the closest thing we will find to a window into the properties of a typical planet of our galaxy." ®