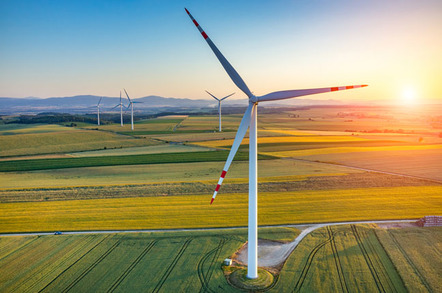 A freshly developed AI system can predict the power generated by wind farms up to 36 hours in advance, helping electrical grid managers plan ahead in terms of availability, according to the latest collaboration between Google and its Alphabet stablemate DeepMind.

Both companies announced this week they together developed a machine-learning system to forecast the level of power produced by farms of wind turbines in the US state of Oklahoma. The system is based on a neural network trained to predict power output by inspecting weather patterns and old troves of turbine data probably using supervised learning techniques. There are no in-depth details of the neural network's architecture and actual results, so take this PR spin with a pinch of salt.

“Based on these predictions, our model recommends how to make optimal hourly delivery commitments to the power grid a full day in advance,” the pair of companies said.

It means that wind turbine farms can schedule when to deliver a set amount of electricity to the power grid and get a better idea of pricing models. The system might also help in scheduling maintenance and downtime for turbines.

“Machine learning has boosted the value of our wind energy by roughly 20 per cent, compared to the baseline scenario of no time-based commitments to the grid,” they added.

Bear in mind, this baseline doesn't really exist in real life – wind plant operators do at least some sort of prediction – so that 20 per cent boost is eroded by the accuracy of whatever manual or heuristic-based prediction engine operators use in the field.

The model was applied to 700 megawatts of wind power generated partly by 93 turbines in Oklahoma owned by EDF Renewable Energy. The wind farm known as the Great Western Wind Project produces about 225 megawatts of energy for Google, its one and only customer.

Google has also partnered up with other companies across the world in Chile, Sweden, and The Netherlands to collect more than 2.6 gigawatts of energy so that it can operate completely on power generated by renewable sources. The goal of using green energy to power its offices and data centers was first proposed in 2016 and achieved a year later in 2017.

It's not the first time that Google and DeepMind have collaborated to improve energy efficiency. DeepMind's machine learning software has helped slash Google's power bills by controlling the cooling systems for its data centers. They are also working on developing features to help save the batteries on Android phones, too. ®