Plus: Up close and personal with Ultima Thule and Fregat saves the day 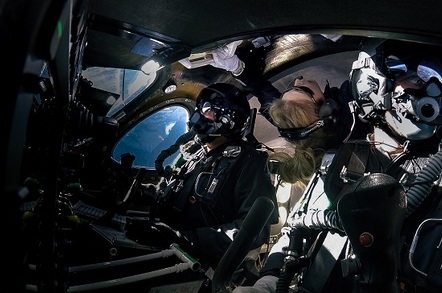 Three in the cockpit of Virgin Galactic's VSS Unity

Roundup Scientists sharpened their view of Ultima Thule last week, while three more space Virgins popped their commercial astro cherries aboard SpaceShipTwo and Elon Musk revealed the fate he has in store for last week's Falcon 9.

The New Horizons team celebrated the latest dribble of data from the distant probe with the sharpest image yet of 2014 MU69, aka Ultima Thule. The images were snapped six-and-a-half minutes before the probe's closest approach and have a resolution of 33 metres per pixel.

The telephoto Long-Range Reconnaissance Imager (LORRI) was used to maximise the scientific data received by the team, who were anxious to get the closest possible look at the surface. The operation was a tad risky and required calculating the exact position of Ultima Thule and the New Horizons spacecraft.

With the probe a billion miles beyond Pluto and travelling at over 51,500kmph (32,000 mph), the principal investigator for the mission, Dr Alan Stern, explained: "This was a much tougher observation than anything we had attempted in our 2015 Pluto flyby," after issuing an exuberant "Bullseye!"

The gang also noted that the images have the highest spatial resolution the probe has ever taken (or may ever take), as it flew approximately three times closer to 2014 MU69 than it did to Pluto back in 2015.

Away from the bizarre surface of Ultima Thule, NASA bigwigs signed off on the launch of SpaceX's Demo-1, albeit with some provisos.

NASA's associate administrator, William Gerstenmaier, responsible for Human Exploration and Operations, noted there were a few issues on the Crew Dragon spacecraft. Gerstenmaier described it as "not fully qualified" but heck, this is why people test after all. He went on to say the team fully expected to learn some new things from the flight.

Of course, the potential for tweaks to the Crew Dragon made between now and the first crewed mission (due in July) left the knickers of NASA's advisory board a little twisty, but NASA intends to press ahead with a 02:48 EST launch on 2 March. Backup opportunities exist over subsequent days.

Gerstenmaier also noted continued efforts to understand the implications (how it might explode) of SpaceX's Composite Overwrap Pressure Vessel (COPV) design before a crew could be launched in the company's finest.

A specific objection from Russia was also called out, with the Moscow team desiring a separate box of electronics to handle an abort in the event the Dragon's computers failed on approach to the International Space Station. After all Japan's HTV and ESA's ATV freighters both feature the tech.

Gerstenmaier said that NASA was confident that all would be OK.

Russia, of course, has experience with out-of-control spacecraft, having punctured the Mir space station during a misjudged docking experiment with its own autonomous Progress spacecraft.

Should the launch be successful, SpaceX will then demonstrate the abort capability of the Crew Dragon using the Falcon 9 from last week's successful launch and landing, according to CEO Elon Musk.

It'll be the fourth flight for this particular rocket and probably the last as Musk observed it would be unlikely to survive the supersonic abort test.

High probability of this particular rocket getting destroyed by Dragon supersonic abort test. Otherwise, at least 20 or 30 missions for Falcon 9. Starship will take over before the F9 fleet reaches end of life.

The abort test will feature a flight upper stage on the Falcon 9, but with a mass simulator in place of the Merlin engine. Musk reckons the poor thing will get "fragged" by the forces involved in the abort.

While SpaceX was lobbing Israeli spacecraft at the Moon, Russia kicked off its 2019 launch campaign by sending EgyptSat-2 into orbit aboard a Soyuz-2 1b. It didn't go well as initial reports had it delivered to the wrong orbit due to an apparent underperformance of the third stage of the rocket or an issue with the Fregat space tug.

Thankfully, the Fregat had sufficient margin to haul the satellite to the correct location but, as the saying goes, these Soyuz problems are starting to "stack up a little".

The issue caused Arianespace to issue a short delay to the Soyuz launch of the first six OneWeb satellites to 21:37 UTC on 27 February, pending the outcome of a launch readiness review the day before.

News from the Spaceport: #Arianespace has postponed transfers of @OneWeb #VS21’s #Soyuz & payload to the launch zone. Decision taken after a successful Soyuz mission from Baikonur Cosmodrome, but with non-nominal third-stage behavior. New #VS21 launch date to be announced ASAP.

Away from the orbital antics of Russia and SpaceX, Virgin Galactic sent its SpaceShipTwo into space once again (or at least beyond the latest definition of where space "starts").

The fifth powered flight of VSS Unity hit an apogee of 295,007ft following a kick by its hybrid rocket motor accelerating it to Mach 3.04. The spacecraft then glided back to a landing that will bring a tear to the eye of nostalgic shuttle-huggers.

As well as an array of experiments, the flight also carried a passenger in the form of Beth Moses, Virgin's chief astronaut instructor, who was able to unstrap and float around the cabin for a few minutes to check things out ahead of the first paying customers.

Naturally, Virgin Galactic boss Richard Branson was chuffed to see SpaceShipTwo continue to push the performance envelope. He did not, however, specify a date for the long-awaited first flight of the company's "future astronauts". Instead, the Bearded One said: "The next few months promise to be the most thrilling yet." ®