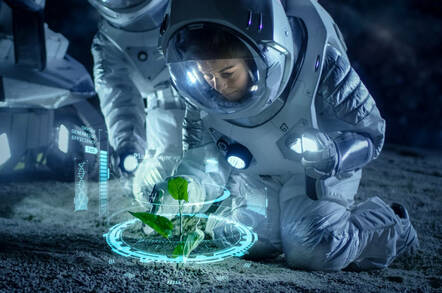 Scientists say they have crafted a semi-synthetic DNA and RNA molecular system that is able to usefully store genetic information. It's hoped that alien lifeforms exist out there with similar exotic biological structures.

In other words, life beyond our planet could be using something like these engineered DNA molecules, and that what we know as DNA is not the be all and end all of life. There are other chemicals for us to look out for and detect that may point to alien life.

The iconic double-helix-shaped DNA is an essential building block for life on Earth, and is, simply put, transcribed to RNA to ultimately direct the production of proteins and kick off processes that are necessary for cellular function.

The biologists also had to adapt the reader-transcriber (the polymerase) enzyme to be able to transcribe the DNA to RNA.

Unlike traditional DNA, this new semi-synthetic system is made up of eight key ingredients instead of the usual four: adenine, guanine, thymine and cytosine. The additional four molecules have incredibly long complex chemical names to spell out here, but have similar structures to the classical nucleotides found in traditional DNA.

"The discovery that DNA with eight nucleotide letters is suitable for storing and transmitting information is a breakthrough in our knowledge of the range of possibilities necessary for life," said Andrew Serazin, president of Templeton World Charity Foundation, an organisation focused on funding scientific advances. The researchers have called their genetic system "hachimoji", meaning eight characters or letters in Japanese. The results were published just before the weekend in Science.

"By carefully analyzing the roles of shape, size and structure in hachimoji DNA, this work expands our understanding of the types of molecules that might store information in extraterrestrial life on alien worlds," added Steve Benner, co-author of the paper and a fellow at the Foundation for Applied Molecular Evolution in Florida.

The project, funded by NASA, hopes to prove that if other types of non-traditional-DNA-based life could exist on other planets or moons of the Solar System, and presumably beyond, it could mean there are organisms flourishing in extreme environments, such as on Mars or the gas giant moons Europa and Enceladus.

"Life detection is an increasingly important goal of NASA's planetary science missions, and this new work will help us to develop effective instruments and experiments that will expand the scope of what we look for," said Lori Glaze, acting director of NASA's Planetary Science Division. ®