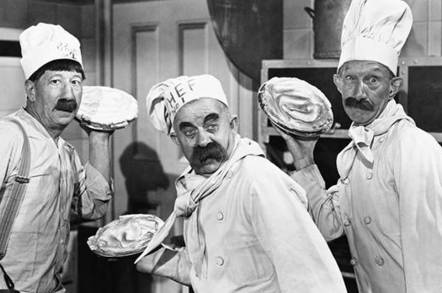 If you were to list the top five reasons why sandwich shop chain Panera has been so successful, with over 2,000 bakeries across the US and Canada, it's unlikely that its IT team would make the cut.

But, according to the company itself, its IT function is not just a key ingredient but its "most important asset."

That claim appears in a lawsuit [PDF] lodged this month in Missouri by the bread biz against three of its former employees who, it claims, are trying to "recreate and carve out Panera’s main competitive advantage, but without any of the work."

That's right, James Dobson, Krish Gopalakrishnan, and Kyle Phillips are being sued for alleged breach of contract and unlawful use of Panera's confidential and proprietary information and trade secrets.

The three of them decided to quit Panera after being offered jobs at a new company run by Panera's former CEO, Ron Shaich, called, currently, Act III.

Shaich then sued Panera for alleged breach of contract. As part of his departure agreement last year, Panera had apparently agreed to allow its employees to move to his new businesses. He argued in his lawsuit that the company had forced employees to sign non-compete contracts that went against his agreement with the biz.

Three days after that lawsuit was lodged, Panera fired back, suing its former employees and Shaich's new company for alleged breach of agreement and accusing them of trying to steal trade secrets.

Which of course raises the question: what kind of critical trade secrets exist in a baking industry and why is the IT team such a key part of that?

Baking bread is not exactly a cutting-edge activity; it first started at least 30,000 years ago. But according to rather a lot of techno-mumbo-jumbo in the lawsuit, the IT systems introduced at Panera cafes are the secret sauce in a highly competitive market.

"Panera prides itself on being several steps ahead of the game in developing its technological systems," the company notes, arguing that they "ultimately drive a guest's experience with Panera." Then there is "Panera 2.0" – no, seriously.

"In approximately 2011, Panera unveiled its vision for 'Panera 2.0,' which consists of enhanced to-go and eat-in options enabled by a series of integrated technologies. 'Panera 2.0' is an integrated, comprehensive, end-to-end solution that aims to reduce wait times, improve order accuracy, minimize or eliminate crowding, and create a more personalized experience."

This system "enables Panera to keep up with high transaction volumes and unrestrained production demands, and thus has enhanced the guest experience," according to the lawsuit.

But the real kicker finally arrives in this paragraph: "Panera understood that there was an opportunity to create value for shareholders and to lower overall service costs for Panera's cafes, by commercializing the technology for other restaurants."

Ah. What that means is: we figured out a system that means we have to hire fewer staff by getting customers to order their own food. And it works without driving everyone completely nuts.

And while that may sound ridiculous, you only have to experience the new ordering console that McDonalds has introduced into some of its restaurants to see how even a hyper-efficient food company can get things really, really wrong when it comes to consumer-ordering tech. The cost of staff in restaurants is probably the largest single overheard, so cutting it means more money in the bank.

The lawsuit goes into extraordinary detail about each person and their role. We learn for example that Dobson chose the software for the front and back-of-house, including the sales terminals, the displays in the kitchen, and the stock and management software that makes sure cafes get the optimal amount of fresh food without running out, or ordering too much and letting it spoil.

Then there's the "system schematics, system design flows, architectural approach notes, and systems service-oriented approach standards, not to mention Panera’s technology pricing and sourcing strategies. It is impossible to quantify the value of Panera’s best practices related to these systems."

The company even goes on about how much effort it puts into making sure none of its IT secrets are stolen: "Panera employs a team of information security personnel whose jobs are dedicated to preventing the unauthorized access and release of Panera’s trade secrets, proprietary data, and intellectual property. Panera also encrypts all of the hard drives in the computers it uses and requires that employees use regularly updated passwords to access these computers."

So it seems that nerds truly do rule the modern world. A world where even one of the oldest industries in the history of mankind – providing food to people – is dependent on IT folk.

There is, of course, an alternative explanation. It could just be that Panera is regretting its decision to allow its former CEO to poach employees, especially after he appears to have become adept at it, and so is making out that every single people he grabs to start up his new business is incredibly important to its business. And that's why they were made to sign non-compete contracts.

That is more than possible. But we like the idea of admins ruling the world, so we'll stick with the concept of tech-heads as business breakers and makers. ®