Azure Kinect: All-seeing 3D camera shenanigans for everyone ... except consumers

Microsoft: don't mention the 'C' word, but you can have it at a discount if you're in the military 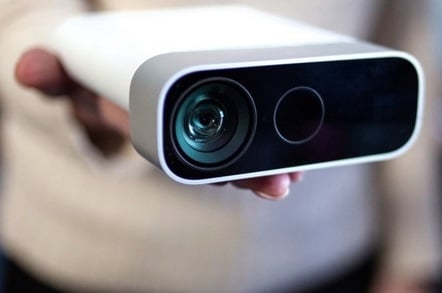 Behold the all-seeing Eye of Azure

MWC Sometimes you have to feel for Microsoft. Even though it failed to keep a lid on HoloLens 2 leaks, the arrival of the Azure Kinect was a surprise. Unless you’d sat through the keynote at last year’s Build, of course.

Microsoft Kinect first made an appearance as an Xbox 360 add-on back in 2010, allowing users to control their console with gesture and voice. Those with longer memories might think back to 2003’s Sony EyeToy (or its successor, the PlayStation Eye) but the Microsoft take on the concept was considerably cleverer, with a sensor array able to capture depth and build a 3D representation of the environment.

Alas, it did not set the world alight and even with Microsoft’s Alex Kipman asserting in Barcelona that “Kinect turned voice and movement into magic”, you needed a room the size of a hanger to make the thing work, assuming you could find games to drive it.

A short-lived SDK allowed Windows users to play with the hardware, and the device was pressed into service as an add-on to PCs. A new, improved version arrived with the Xbox One in 2013 before Microsoft finally pulled the plug on the device in 2017.

Despite Microsoft's ongoing retreat from the consumer market, the company reckons there is a demand for a Kinect device at enterprise level and hence the thing has been given a thwack with the Azure stick, had its internals upgraded, and branded "Azure Kinect".

The gang at Redmond see the 3D camera as being a companion to the new HoloLens 2 as well as utilising Azure AI smarts to understand the environment it is looking at. On stage in Barcelona at the mobile shindig, CEO Satya Nadella gave the example of patients falling in a hospital. A network of Azure Kinect cameras could, according to Microsoft, detect patients about to take a tumble and summon staff to come to their aid.

A noble cause, and one Apple has been plugging with its Watch product. The falling over bit, at any rate.

Despite being half the size of the original Kinect, the thing is, however, not cheap. A developer kit will cost $399 per camera and Microsoft is at pains to point out that that it is aimed at developers and businesses.

Or to eligible teachers, parents, students and, a little awkwardly right now, the military, at the bargain price of $359.10.

Like HoloLens 2, consumers are not part of the plan.

Furthermore, the current iteration of the device has a very limited operating temperature range – from 10˚C to 25⁰C – which may put off some industrial users.

Rocking a 12MP RGB camera, 7-mic spatial array and 1MP depth camera, the thing won't ship until 27 June 2019. By then, the full suite of SDKs should have put in an appearance, with versions due for Windows and Linux for raw sensor access and body tracking. Already available are APIs for image recognition and speech understanding.

For Azure, naturally. Because in those Azure services is where Microsoft would dearly like developers to stay. ®