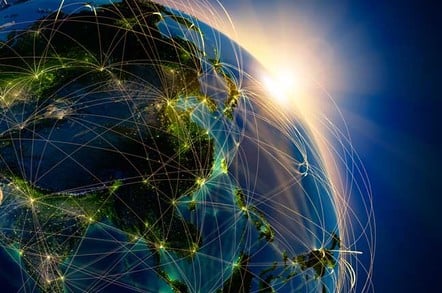 While HoloLens 2 took center stage at this year's Mobile World Congress in Barcelona, Microsoft sneaked out some intriguing Azure Internet-of-Things news aimed at dealing with connectivity challenges in remote areas.

Those partaking in the Satya Nadella buzzword drinking game were likely under the table before the Microsoft CEO uttered the "finish your glass" acronym: AI. The early part of his keynote session today, which ended with the crowd-pleasing Qualcomm Snapdragon 850-powered HoloLens 2, was concerned with that other passion of Nadella – the Intelligent Cloud and Intelligent Edge.

Following Sunday's frolics, things got more serious on Monday as satellite data flinger Inmarsat announced that Microsoft Azure customers would be able to hop on to Inmarsat's global satellite communications network. In other words, if you're a Microsoft cloud customer, your IoT infrastructure out in the field, perhaps literally, can shunt data up to the Azure IoT Central platform for analysis via Inmarsat's sat-com network.

Plugging into satellite-based infrastructure deals with one of the challenges of IoT gear that's out in the sticks: how exactly do you collect data, and beam it back efficiently, or send commands to devices way out of reach? There's an ongoing push in the embedded electronics world to pack as much processing oomph and intelligence onto the network edge or the gizmos themselves, so that they can make decisions without having to regularly shuttle readings back to base, over the airwaves or cable, for analysis on more powerful backend boxes.

However, there still needs to be some kind of communications channel to send and receive updates, issue commands, and so on. Piping chatter to and from servers and gadgets via Inmarsat will, Microsoft hopes, ease the connectivity issues inherent in accessing stuff in remote locations.

For a price, of course. We contacted Inmarsat to check what that price might be, and were told by a spokesperson that "contracts of this nature will be highly customised and will be tailored to reflect the specific needs of the customer."

There is good news on the availability front. The pair are testing their integration in "live environments" and "will present these publicly in the coming months".

Just in time for this year's Microsoft Build conference perhaps?

Microsoft's characteristic IoT hyperbole, estimating 20 billion connected devices, was, however, trumped by Vodafone and Arm, which during MWC 2019 reckoned a trillion devices would be connected by 2035.

The duo also took advantage of the Barcelona sunshine to announce a partnership that will see the chip designer's SIM card technology deployed and provisioned via the telco's network. The plan is to dispense with SIMs entirely, replacing the things with Arm's Kigen iSIM along with Narrow Band-IoT (NB-IoT) and Long Term Evolution for Machines (LTE-M) technologies for connectivity.

The pair reckon that the tech will mean a single IoT product can be shipped and hooked to Vodafone's global IoT network pretty much anywhere. Alas, excitable IoT fans will have to wait until the first quarter of 2020 to see the first fruits of the partnership. Doubtless just in time for someone to slap a 5G sticker over everything.

Finally, Arm also launched a security certification scheme for IoT system-on-chips. If a component meets Arm's set of security standards, which includes things like over-the-air firmware updates for bug fixes, and secure boot, then it can be labeled PSA Certified by independent testing labs, PSA being Arm's Platform Security Architecture.

Thus if you're a maker of IoT gear and you need a chipset that's been judged as meeting Arm's aforementioned security specification, you can look out for PSA Certified parts for your product. This is not a consumer-facing branding, sadly, which means you won't be able to browse online stores for devices and look out for a reassuring PSA Certified logo knowing it has a pretty good security model, which feels like a bit of a missed opportunity. ®