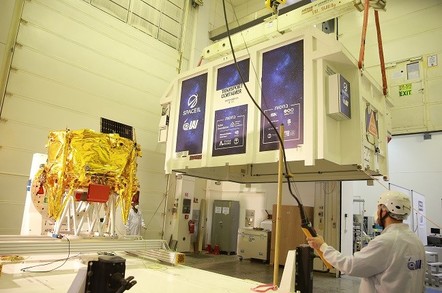 The first Israeli lunar spacecraft getting packed up for Florida (credit: Tomer Levi)

SpaceX has sent the first privately funded lunar lander on its way to the Moon following an evening launch from Canaveral Air Force station.

The Falcon 9 was on its third flight having launched the Iridium-7 mission in July 2018 and the SAOCOM 1A mission the following October.

The company pulled off the crowd-pleasing stunt of landing the booster back on SpaceX's "Of course I still love you" drone ship less than nine minutes after lift-off. SpaceX had previously attempted to dampen expectations, as a commentator described the landing as "the most challenging ever attempted".

Falcon 9 first stage has landed on the Of Course I Still Love You droneship, completing this booster’s third launch and landing. pic.twitter.com/IP6yvi8SQa

The rocket left the pad at Space Launch Complex 40 at 01:45 UTC, marking the first launch for SpaceX from the facility in 2019. The lunar lander was deployed just after 33 minutes into the flight, and the other payloads, an Air Force Research experiment and Nusantara Satu, Indonesia's first high-throughput communications satellite, were released after 44 minutes.

The primary payload on the mission was Nusantara Satu (also known by the less glamorous sobriquet PSN-6). The 4,735kg satellite, manufactured by Space Systems Loral (SSL), is destined to spend at least 15 years in geostationary orbit, providing voice and data communications throughout the Indonesian archipelago.

The spacecraft will use electric propulsion to get into orbit and has traditional, chemical thrusters for stationkeeping.

Piggybacking on the launch was the Air Force Research Laboratory (AFRL) S5 experimental small spacecraft, which will carry out a one-year mission tracking objects in geostationary orbit, and SpaceIL's lunar spacecraft, Beresheet.

Beresheet (Hebrew for "in the beginning") was put together by non-profit outfit SpaceIL to win the Google Lunar XPRIZE.

Formed in 2011, SpaceIL were the first team to announce a signed launch contract and in January 2017 were named as one of the five finalists in the competition.

Google pulled the plug in January 2018, and the contest officially ended on 31 March 2018 with no outright winner. However, additional funding kept SpaceIL alive, culminating in today's launch.

The 585kg lander will make its way to the Moon under its own power and is expected to arrive in orbit on 4 April before heading to a soft landing on 11 April. It doesn't contain much in the way of instruments, carrying a laser retroreflector array from NASA to aid with ground tracking and a magnetometer to measure the magnetic field above and on the spacecraft's landing site.

The spacecraft will also plop the Israeli flag on the lunar surface and take some snaps before the mission ends two days later. A success will make Israel the fourth country to have achieved a soft landing on the Moon's surface.

Assuming everything goes according to plan. ®

You want how much?! Israel opts not to renew its Office 365 vows

Government to cut Microsoft off at the end of 2018

RSA 2018 Intelligence agency a pipeline for women in infosec