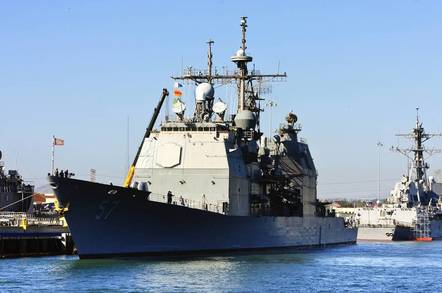 Neural networks have proven surprisingly adept at detecting radar signals – and could help the US Navy and civilian mobile networks better share their overlapping radio spectrum.

The 3.5GHz frequency band, also known as the Citizens Broadband Radio Service (CBRS) stretches between 3550 and 3700 MHz. In 2015, America's comms watchdog, the FCC, began allowing companies in the Land of the Free to access the CBRS channel for wireless high-speed internet access.

Telcos such as AT&T and Verizon are permitted to use sections of the 3.5GHz band near the coast, but only if the Navy isn't using the frequencies for radar at that moment: otherwise there'll be interference between the cellular broadband transmissions and radar pings. If ships need the spectrum, then all nearby commercial access has to be relocated to an unused portion of the frequency band. The network operators rely on energy detectors to detect if radar signals are being used offshore, and relocate their transmissions if so.

This approach isn't particularly effective, however, according to Michael Souryal, a researcher at America's National Institute of Technology Standards (NIST) working on wireless communications systems.

“These energy detectors are not discriminating enough to consistently get it right, sometimes confusing other radio frequency signals as radar or missing the radar signatures altogether,” he said on Thursday.

So, a team of researchers at NIST decided to explore whether or not neural networks may be able to do a better job at picking out radar signals and acting on them.

They analyzed 13 different machine learning algorithms, and found that a small, three-layer convolutional neural network (CNN) performed best. First, they trained the models with 3,982 spectrograms describing radar readings, and tested them on 509 spectrograms to see if the AI software could identify them accurately.

The results, published in the IEEE Transactions on Cognitive Communications and Networking journal, show that the CNN scored 0.997, and the traditional energy detectors reached 0.884. A perfect classifier has a score of 1.000.

These convolutional neural networks can also be used to evaluate the level of background and interference noise as well as working out how much of the band is being occupied. “Radar detectors in the CBRS band will be owned and operated by commercial entities, what the FCC refers to as Environmental Sensing Capability (ESC) operators,” Souryal said.

More research and testing is needed before these AI systems are deployed by the mobile operators to automatically switch off and on their mobile broadband near the coast. ®

NIST set to shake up temperature with quantum thermometer

Software can be more secure, says NIST, and we think we know how

Standards org's wish-list probably looks a bit like yours

Are you Shor you want to try this?