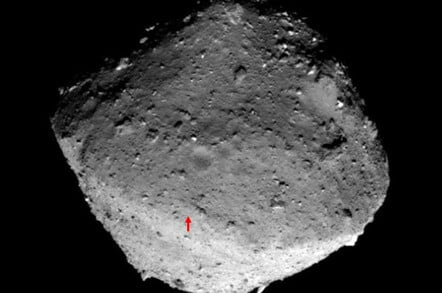 Japan's Hayabusa 2 probe has successfully collected a sample from the surface of asteroid Ryugu following a careful descent last night.

It was all a bit tense as the probe dropped toward the asteroid, with a loss of telemetry leaving boffins listening for changes in doppler data to indicate that the milestones were ticking over.

Once telemetry had been restored as planned at 23:07 UTC, JAXA was able to confirm that everything was hunky-dory by 23:42 UTC.

[TD1-L08E1] 2/22 at 8:42 JST. The following has been confirmed at Gate 5:
・Projectile was command to fire.
・Normal sequence.
・Spacecraft state is normal.
Based on this, we determined touchdown was successful! A detailed analysis will now be done.

The news was delivered by the Project Manager and, according to JAXA, "everyone clapped again". The spacecraft has since returned to its home position, above the asteroid.

The operation is part of an ambitious load of science being conducted by the spacecraft, which has already dropped the MINERVA-II robots to bimble about on the surface as well as the MASCOT lander.

Yesterday the probe collected samples from the surface with the Sampler Mechanism (SMP), which has the same basic design as that flown on the earlier Hayabusa mission. The system requires the probe touch down on the surface, sampling "horn" end first. When the cylindrical horn detects the surface, a small, bullet-like projectile is fired at the asteroid to kick up some dust.

The material is then collected for return to Earth.

As with the rest of the probe, improvements have been made over the original Hayabusa, which limped back to Earth after a troubled mission to the asteroid Itokawa. The team increased the number of compartments in which materials would be stored from two to three and improved the seal of the compartments in the hope of capturing gases released by Ryugu.

You can make your own joke about releasing gas when faced by a probe with a horn.

The next step, tentatively scheduled for March or April, is for Hayabusa 2 to fire a 2kg lump of copper at the surface. The Small Carry-on Impactor (SCI), which consists of a cone filled with explosives, will send the impactor to the surface at 2km/s. The resulting crater will allow the probe to peer at Ryugu's internals as well as attempt another landing to capture the fresh material.

Hayabusa 2 will then loiter around the asteroid for a few more months before setting off for Earth at the end of 2019, with the precious samples securely on board.

In a classy move, the Twitter orifice of NASA's own asteroid botherer, OSIRIS-Rex, was quick to offer the Hayabusa 2 congratulations on the achievment.

Congratulations on your successful touchdown, @haya2_jaxa! We're excitedly waiting for the telemetry and confirmation of sample collection. pic.twitter.com/iBeQHZxPsc

OSIRIS-Rex is currently mapping potential sample spots on the asteroid Bennu, ahead of dropping down to collect anything between 60 and 2,000g of material before returning to Earth itself by 2023. ®