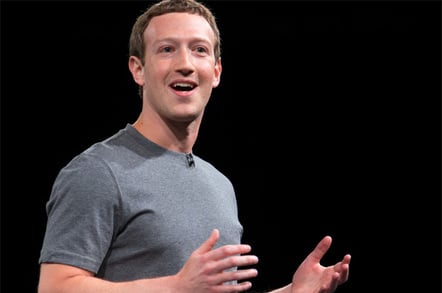 Facebook is not going to give people the option to pay it to stop gathering and selling their private information because it wouldn't be fair to those that can't afford it.

That's the world according to its CEO Mark Zuckerberg who appeared unaware of one of the internet's oldest business models in conversation with Harvard law professor Jonathan Zittrain.

"Are we going to let people pay to have different controls on data use than other people? And my answer to that is a hard no," the Zuck chucked, adding: "If I could buy my way out of ads and data collection it wouldn't be fair to those who can't."

Whether that is an indicator of just how valuable user's personal data is to the social media giant – enough they wouldn't want to pay for it – or a logic argument that sounded good when he said it but was more about not wanting to say what he really thinks, we may never know.

What we do know is that Mark Zuckerberg seems confused by his own company's actions. Asked by Zittrain about his pet idea that Facebook be expected to act as a "information fiduciary" where it is morally and legally responsible to look after people's data in their own interests, Zuck replied: "The idea of us having a fiduciary relationship with the people who use our services is intuitive."

But he then argued that the company's "own self-image of ourselves and what we’re doing is that we're acting as fiduciaries and trying to build services for people." Which will be news to anyone that has been following Facebook's concerted and persistent efforts to hide what information it gathers, and what it does with that information.

Zuckerberg even gave an example of what would be going too far: "If you want to talk in metaphors, messaging is like people's living room, and we definitely don't want a society where there’s a camera in everyone's living room." To which, of course, Zittrain pointed out that Facebook is literally selling a new device, Portal, that is an internet-connected camera for people's living rooms. Zuck sort-of recovered by noting that his device uses encryption.

Living in a bubble

But you can't help but wonder whether Mark Zuckerberg is completely oblivious to what his own company is doing and how people feel about it. Just because he trusts a corporation in which he retains majority control and enjoys the enormous wealth and power it affords him doesn't mean that everyone else does. Does he get that? Quite possibly not.

One area where he does seem to have got a sudden reality check was when Apple effectively shutdown every internal and under-development app in his company for iPhones when Apple pulled its security certificate for abusing the terms and conditions.

Roses are red, Facebook will pay, to make Uncle Sam go away

The company was found to be running a secret, non-public VPN program that paid people to allow Facebook to track their full phone usage. It was a blatant breaking of Apple's privacy rules and the company must have known but did it anyway.

The ensuing headache appears to popped the Zuck bubble. Talking about the Facebook Connect system where people are able to login to a different website using their Facebook credentials – a system that gives both parties access to far more personal data that would normally be possible – Zuckerberg had an unusual perspective given the program's enormous value to the company.

He went on: "For developers, one of the things that is really troubling about working with our system - or with Google's system for that matter, or having to deliver your services through Apple’s App Store - is that you don't want to have an intermediary between the people using your service and you."

Yep, that's right Mark. So glad you finally got there. ®