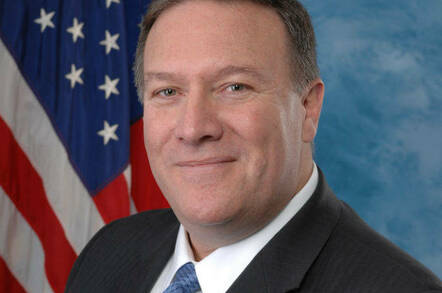 Smug-shot ... US Secretary of State Mike Pompeo lays down the law

US Secretary of State Mike Pompeo has confirmed that Uncle Sam will no longer provide top-secret intelligence to countries that use Huawei equipment in their core networks.

Speaking to Fox Business on Thursday, Pompeo said allies using the Chinese vendor's gear in their critical infrastructure can't be trusted to keep confidential info hush-hush, for fear their equipment might be bugged and transmitting US intelligence back to Beijing.

"If a country adopts this and puts it in some of their critical information systems, we won’t be able to share information with them,” Pompeo said. "In some cases there’s risk – we won’t even be able to co-locate American resources, an American embassy and American military outpost.”

The statements more or less formalize a series of hints the US has been dropping in recent months to European governments that they should not adopt Huawei devices in their core networks. Earlier this month, Pompeo hinted that America would withhold intel from countries that were using Huawei gear, but until now had stopped short of declaring a firm policy.

Some nations are less than convinced there is a threat to national security. Germany has said it's considering using Huawei kit i its infrastructure, and has seen no evidence of the Chinese manufacturer introducing backdoors or other security risks, and the EU says the same. The UK is poring over Huawei's source code and blueprints, and is expected to report back on the state of the technology's security soon, although it has grumbled about some flaws already.

The US fear is that Huawei's close ties with Beijing's spymasters have forced the IT giant to bug its networking switches and gateways it supplies to other governments, allowing Chinese snoops to peer into foreign networks from afar and swipe national and industrial secrets. With countries looking to purchase Huawei gear to help build out their networks, particularly their 5G coverage, the US government worries that China could intercept and monitor network traffic and communications all over the globe.

Others have said that, in the lack of evidence, the Huawei warnings could be a way for the US to damage a major Chinese telecoms manufacturer to help American businesses grab some of the lucrative revenues that will come in the ramp up of 5G rollouts. The same American businesses the NSA bugged.

As for claims of security concerns, these are, for some, relegated to the same status as Iraqi weapons of mass destruction.

The US administration has already more or less banned Huawei from the public sector in the Land of the Free by blocking government agencies from using its gear and preventing any telco that gets government funding (read: all of them) from buying Huawei hardware.

Those fears were amplified by the December arrest and charging of Huawei CFO Meng Wanzhou on charges of evading US trade sanctions on Iran. Wanzhou and Huawei have denied the allegations, and maintain they are not compromised by the Chinese government. ®