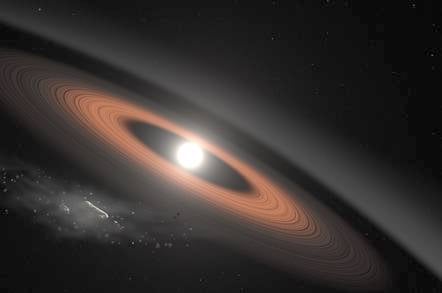 Pic An amateur astronomer has discovered the oldest-known white dwarf star, sitting 145 light years away from Earth in the Capricornus constellation.

Melina Thévenot volunteered to help NASA hunt for brown dwarfs by analysing grainy images of candidate stars taken by the Wide-field Infrared Survey Explorer (WISE) telescope as part of the The Backyard Worlds: Planet Nine project. This is a citizen science project launched two years ago which calls upon space enthusiasts to help find low mass stars nearby. It's hoped that the imaging may reveal the elusive "Planet Nine" thought by some to be hovering around the edges of our Solar System.

Instead of Planet Nine, however, Thévenot stumbled across another gem. She spotted a blob that was far too bright and far away to be a brown dwarf, so she alerted the team working on the project. A team of astronomers were called to make follow up observations using the Keck II telescope at the Keck Observatory in Hawaii.

They found a star, code named LSPM J0207+3331 or J0207 for short, shrouded in dust rings. The star is estimated to be three billion years old with a temperature of about 5,800 degrees Celsius, making it a white dwarf.

"This white dwarf is so old that whatever process is feeding material into its rings must operate on billion-year timescales," said John Debes, co-author of the paper published in The Astrophysical Journal Letters and an astronomer at the Space Telescope Science Institute, on Tuesday.

J0207 has left scientists puzzled as white dwarfs don’t normally keep their dust rings for that long. “Most of the models scientists have created to explain rings around white dwarfs only work well up to around 100 million years, so this star is really challenging our assumptions of how planetary systems evolve," Debes added.

As a bog-standard Sun-like star starts dying from the lack of fuel, it begins to swell into a red giant and swallows surrounding asteroids and planets. The strong gravitational interactions rip these bodies apart and crushes the debris into rings around the elderly star if it shrinks to become a white dwarf. Any material leftover in the disk will eventually be absorbed by the star.

When white and brown dwarfs mix, the results are rather explosive

Thus, senior white dwarf stars like J0207 shouldn’t really have that many dust rings. This specimen, however, is colder and almost three times older than any other white dwarf known to have a dusty disk around it. It is estimated that between one and four per cent of all white dwarfs are shrouded in dust.

Thévenot, also a co-author in the paper, is working together with more than 150,000 other volunteers on The Backyards World project. “The researchers will move their telescopes to look at worlds you have discovered. That is a really motivating aspect of the search," she said.

The project shows that you don’t always need fancy equipment to stumble across cosmic goodies. Marc Kuchner, a co-author and the principal investigator of the project, said: “We built Backyard Worlds: Planet 9 mostly to search for brown dwarfs and new planets in the solar system. But working with citizen scientists always leads to surprises.”

“They are voracious — the project just celebrated its second birthday, and they’ve already discovered more than 1,000 likely brown dwarfs. Now that we’ve rebooted the website with double the amount of WISE data, we’re looking forward to even more exciting discoveries.” ®