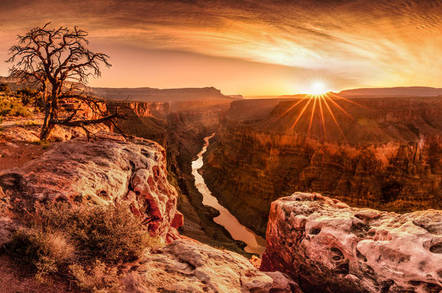 Grand Canyon visitors may have been exposed to tiny amounts of bonus radiation from buckets of uranium ore bafflingly placed in the National Park’s museum for nearly 20 years.

Elston “Swede” Stephenson – the safety, health, and wellness manager working at the breathtaking American landmark – claims park officials failed to properly dispose of the material and refused to warn the public about the ore's potential health hazards in an attempt to cover up the mishap.

In a bizarre story, first reported this week by The Arizona Republic, Stephenson recounts the tale of what happened when three five-gallon buckets chock-full of uranium ore were found inside the park’s museum last year.

The containers were found by another employee’s teenage son, we're told. Described as a “Geiger counter enthusiast,” the teen was, presumably, stunned when his device suddenly began clicking away incessantly as he explored the site. The source of the elevated radiation readings was traced to three plastic buckets bunched together in the park's Museum Collections Building.

Stephenson reckoned they had been left sitting beside a taxidermy exhibit for a whopping 18 years, from 2000 onwards, and one was so full of the radiative rocks that the lid on the drum couldn’t be closed.

The discovery prompted the museum’s employees to quietly remove the stash from public view in 2018. The radioactive specimens were stored in another building within the museum site, and left untouched for months until Stephenson kicked up a fuss.

He called in technicians to completely remove the rocks, which were eventually dumped into Orphan Mine about two miles away from the Grand Canyon Village. When he asked about radiation readings, he said the technicians refused to tell him any more details.

So, he filed an official report with the Occupational Safety and Health Administration, an agency within the US federal government’s Department of Labor. Official inspectors paid a visit to the National Park and found “low-level” radiation in the Museum Collections Building because, for some reason, although the uranium ore was disposed of in the mine, the buckets had been returned to the site.

On average, people receive a radiation dose of about 620 millirems per year and approximately 50 per cent of that comes from natural sources like uranium ore, according to the United States Nuclear Regulatory Commission (NRC).

The commission also recommends that members of the public receive “less than two millirems in any one hour from external radiation sources in any unrestricted area.”

Uranium ore is potentially hazardous depending on its purity, though it’s not usually at a high enough level to prevent, say, actually mining the stuff. “For a person standing one metre from a 200-liter drum of [uranium oxide concentrate] they would need to be there about 1,000 hours to register a dose of 1 mSv” – equivalent to 100 millirem – according to the World Nuclear Association.

In other words, sod all radiation if you're just walking past it.

One important point to consider among all of this is that naturally occurring uranium ore emits alpha particles as it slowly decays.

These particles can be stopped by paper, clothes, skin, and even a few inches of air. This means Grand Canyon visitors and workers were most likely shielded from the ore's radiation by their t-shirts, jeans, and skin, or the buckets themselves, assuming they were standing close enough to begin with. Unless folks were licking the rocks, or breathing in dust from the material, or sticking their heads inside the open containers to gnaw on the ore, they should be fine.

Uranium admittedly decays into not-very-nice things like lung-cancer-gifting radon, yet we're talking such small amounts of a gas that has a half life of about three days, it's again not anything to really worry about in a ventilated building.

Some beta radiation is also given off during the uranium's decay chain, which again can be stopped by a few feet of air, or walls, or a layer of plastic, metal, or wood. Again, the beta particles may have been mostly blocked by the buckets themselves and the air around them.

Generally, it's best not to leave this kind of stuff lying around, though, just in case, especially with a lid not on it – if not for the radiation, then for the fact it is as toxic as lead.

Nothing to see here, move it along...?

Stephenson insists visitors and employees may have received dangerous amounts of radiation, though, if they entered the museum between 2000 and March 2018. Frustrated with the lack of action taken by park officials, he sent an email to all Park Service employees warning them of possible health risks and claimed the alleged cover up was "a top management failure."

El Reg asked the NRC how much of a risk the uranium ore buckets posed to the public, although a spokesperson told us: “Raw uranium ore lies outside the NRC’s jurisdiction.” We were directed to the Arizona Department of Health Services (ADHS), Bureau of Radiation Control, instead.

"The Arizona Department of Health Services received a report in December 2018 of possible radiation exposure at the Grand Canyon National Park museum collection facility that took place prior to June 2018," an ADHS representative told The Register.

"Based on this report, ADHS conducted a survey at the facility as soon as surveyors could gain access to the site in February 2019 following the federal government re-opening. ADHS determined there is no current risk to the public or employees.

"The ADHS survey found radiation levels at background levels, which is the amount always present in the environment and below levels of concern for public health and safety. Uranium naturally occurs in the rocks of Grand Canyon National Park. The museum collection facility is open, and employee work routines have continued as normal."

There is or was, therefore, we reckon, no super-scary risk to visitors and employees, unless someone chomped on the ore, or huffed on its radon gas, or spent hours standing next to it with the lid off, or got its dust on their hands and then ate a sandwich.

Then again, it's obvious this stuff shouldn't be left sitting there for that long anyway, to avoid the ingestion of dust, and a build up of radon gas and other decay daughters of uranium: it is ultimately a toxic and hazardous material. And it shouldn't have taken a whistleblower to reveal this cock-up to the public.

ADHS said "it is finalizing the report of the survey at the museum collection facility, and will share additional information when it is available."

"ADHS takes public health and employee safety concerns seriously and will continue to work with the National Park Service and the Occupational Safety and Health Administration to ensure there is no risk to the public or employees," the representative concluded.