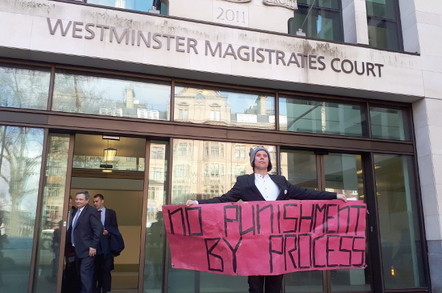 "Mr Love, you're not the victim in this. You brought this on yourself; you're the victim of your own decisions," District Judge Margot Coleman told accused hacker Lauri Love in court today as she refused to return computers seized from him by the National Crime Agency.

Love, 34, had asked for the return of computers and peripherals taken from him by the National Crime Agency (NCA) when they raided his home in 2012. The Briton, who also has Finnish citizenship, has been accused in the US of hacking a number of government agencies including NASA and the US Department of Energy.

He has not been charged in the UK. The US government tried and failed to extradite Love from the UK last year, with the Lord Chief Justice ruling: "Mr Love's extradition would be oppressive by reason of his physical and mental condition". Love has been diagnosed with an autism spectrum disorder.

District Judge Coleman said at Westminster Magistrates' Court today: "The property as we identified it at the hearing is in two parts. One is the computer equipment itself and the other is the data you can take on it. I think you conceded – certainly I've made the finding – the information contained on that hardware is not yours. And you're therefore not entitled to have it returned to you; it doesn't belong to you."

She continued in her written judgment [PDF] on Love's application, which was made under the Police (Property) Act 1897: "I found Mr Love to be evasive. He repeatedly tried to avoid answering questions by posing another... his refusal to answer questions about the content of the computers has made it impossible for him to discharge the burden of establishing that the data on his computers belongs to him and ought to be returned to him."

Love, she said, "asked me to accept an undertaking from him that if the computer hardware is returned to him he would not decrypt or even attempt to decrypt any of the data. That is not a course I am willing to take."

The former electrical engineering student from Suffolk did not have a lawyer for his application and represented himself against barrister Andrew Bird, who appeared for the NCA.

The NCA did get inside one of Love's hard drives

Love wanted the return of two laptops and a PC tower. On a Fujitsu Siemens laptop the judge ruled that he had "private and confidential data exfiltrated ('hacked') from the 'Police Oracle' website", which is a news site for police workers. His Compaq computer tower contained, among other things, "pirated versions of copyrighted films", while a WD external HDD had a file on it named in the judgment as "truecrypt2".

A hard drive within one of the laptops contained a file identified as "truecrypt1". However, the judge ruled that this drive also contained:

The NCA copied the drive's contents through the use of a so-called "harvest drive", which the judge said "allows data to be seen and preserved". The NCA slurped 124GB of data; however, "before that process could be finished an encryption process cut in to the devices themselves". DJ Coleman ruled: "I find as a fact that the information on the HARVEST drive is data taken from Mr Love's computer equipment. This is not a situation where the computers have been used as a repository by others, as Mr Love suggested may have been the case."

Love, who wore his usual tieless black suit with a neatly pressed white smart-casual shirt, argued that his computers contained data of "inestimable sentimental value" to him, saying that the NCA and the Crown Prosecution Service ought to "do one's business or get off the pot" and charge him with a crime instead of leaving him in legal limbo and making accusations against him that, he said, he could not fully respond to.

DJ Coleman ruled that Love was "unwilling to answer questions about the contents of the computers". Precise details of his cross-examination by Bird are withheld from the public by a reporting restriction order because, the judge ruled, it could "compromise a criminal prosecution" later on.

'Have you tried to get a job?'

Barrister Andrew Bird for the NCA asked the judge to award legal costs for the application against Love. He said: "The reason why the court should award costs is this isn't the first time this application was made."

Love had originally made an application to Bury St Edmunds magistrates in 2015 before withdrawing it and resubmitting it.

"The public has funded this defence to this claim," Bird told the court, "and it may well be thought wrong the public should have to fund extensive costs in a claim of this nature."

On being fiercely questioned by DJ Coleman about why he withdrew and resubmitted his application, Love said he shouldn't have to pay the NCA's legal costs just because he asked for his computers back, arguing that even if the odds "are only 50 per cent favourable, some people have to try. The arguments can be heard, occasionally the arguments persuade the court."

Scoffing, DJ Coleman replied: "Mr Love, your arguments didn't even get off the starting block because you didn't have an argument... there are consequences to the steps you take."

Speaking outside the court, Love later said: "What has gone badly wrong here is that criminal accusations were levied in a civil court while I was unrepresented, without me having access to the evidence that was proffered; this is highly irregular, not rule of law. My ultimate aim is to be prosecuted. A weird thing to say because I don't think I committed a crime, but until I am prosecuted, successfully or unsuccessfully, I can't leave the country because my friends in America might try to kidnap me again."

He added: "If I don't appeal this case, I can just see that the law has taken a very regressive stance on cryptography and people no longer have property rights if they do not cooperate in decryption. This is a terrible state of affairs."

Gasps of "oh my god" and "what the fuck?" came from the public gallery. Clearly stressed, Love walked in a small circle as he gathered his thoughts. A stony-faced District Judge Coleman tapped the bench with her hand, fingers pointed outwards, and said: "Can you just focus on the question please, I don't have the time for this! You made, withdrew the application, three months later you renewed it. I expect a simple answer. Why did you decide you would launch this again?"

Levelly, Love replied: "There was a chance I would be taken from the country and never have an opportunity to seek restitution. I thought I should do it immediately... it's very hard to use the civil courts when you're in a cell in New Jersey."

"Mr Love, you're not the victim in this," replied the judge. "You brought this on yourself, you're the victim of your own decisions. We're only talking about you. Have you any income?"

"Have you tried to get a job?" asked District Judge Coleman, prompting whispers of "Oh my god are you serious, is she for real?" from the public gallery, where Love's friends and supporters, including his girlfriend Sylvia Mann, were sitting.

Flushed, Love replied: "I'm meeting someone on Wednesday to try and get a job as a security consultant. I am studying informally."

Grimacing, the judge eventually said she was not going to "make an order, which technically could be made, against a litigant in person who I'm satisfied won't have known the difference. It is irritating to say the least that the taxpayer has had to bear the cost of the proceedings. But I'm not going to make an order." ®