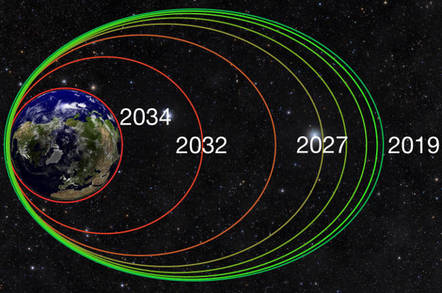 Cya in 2034 ... How the probes will reduce their orbit over time until they burn up in Earth's atmosphere

NASA’s twin probes studying Earth’s radiation belts are in the last stages of their mission – and will end their lives by nosediving into our planet’s atmosphere, the US space agency announced Thursday.

The Sun constantly ejects streams of highly energetic protons and electrons that are deflected by Earth’s magnetic field. The charged particles eventually settle into two invisible rings, known as the Van Allen radiation belts, around our planet.

They are a treacherous zone, and have been home for NASA’s Van Allen probes for the past six and a half years. Launched in 2012, the pair have been diving in and out of the radiation belts at about 2,000 miles per hour to help scientists understand the phenomena and how they affect space weather.

One of the probes has begun descending to a mere 190 miles away from Earth from 375, so that it will eventually reenter the atmosphere and burn up. The whole process will take about 15 years, apparently.

“At the new altitude, aerodynamic drag will bring down the satellites and eventually burn them up in the upper atmosphere. Our mission is to obtain great science data, and also to ensure that we prevent more space debris so the next generations have the opportunity to explore the space as well."

The second spacecraft is going to stay put for a little while longer, though, eventually, it too will begin operations to end its life in the same grisly way. Both spacecraft have just enough fuel to complete the maneuvering engine burn and keep their solar panels facing the Sun for the next year.

The mission was only expected to last two years, since NASA believed that was as long as the probes would survive in the harsh environment. It has exceeded expectations thanks to the crafts' radiation-hardened components.

“The Van Allen Probes mission has done a tremendous job in characterizing the radiation belts and providing us with the comprehensive information needed to deduce what is going on in them,” said David Sibeck, a mission scientist for project.

“The very survival of these spacecraft and all their instruments, virtually unscathed, after all these years is an accomplishment and a lesson learned on how to design spacecraft.”

During the last year of their lives, the probes will study how oxygen in Earth’s upper atmosphere can deteriorate satellites over time. ®