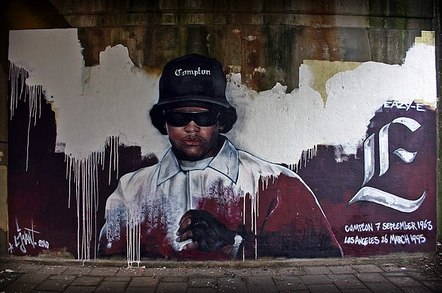 Eazy-E mural by street artist LJvanT. (In Leeuwarden, Netherlands, because why not?) . Pic: Ljvant, CC by 3.0

British council halls are about the least hip places on the planet, full of fusty old folks umming and erring over whether the introduction of a Lidl branch will forever shatter the "street scene".

So it's no surprise that one chap's bizarre quest to have "Godfather of Gangsta Rap" Eazy-E – famously from Compton, California – honoured as a statue in the port town of Newhaven, in East Sussex, has mostly fallen on deaf ears.

According to beloved Brighton-based rag The Argus, Guy Stevens has been petitioning the town council to immortalise his hip-hop hero.

Who is Easy-E and what's the IT angle?

Eric Lynn Wright, better known by his drug-dealer nick Easy-E, was a rapper straight outta Compton, California, who rose to fame as part of the seminal hip-hop group NWA, which stands for Young African American Gentlemen With Attitude.

NWA also counted household names Ice Cube and Dr Dre among its number, the latter of whom went on to become a renowned MC and producer in his own right, launching the careers of Snoop Dogg and Eminem.

The group's 1988 debut album, Straight Outta Compton, is widely regarded as one of the best of all time for its brazen handling of socio-political issues in a manner alien to popular music until then.

The title track and 'Fuck Tha Police' are particularly well-known cuts from the record.

On the former, Easy introduces himself thus:

Straight outta Compton / Is a brother that'll smother your mother / And make your sister think I love her / Dangerous motherfucker raising hell / And if I ever get caught, I make bail

NWA split after Easy forced Dre out of their label, Ruthless Records, by bringing businessman Jerry Heller on board. This sparked a feud between the two, enshrined in diss tracks 'Fuck Wit Dre Day (And Everybody's Celebratin')' and Easy's 'Real Motherphuckkin' G's' among others.

In 1995 he died of AIDS believed to be contracted from a lover.

In the immortal words of Lester Haines, late of this parish: There is no IT angle.

"Just do it," Stevens pleaded with the authority. "Get a statue or a plaque up. Why not?

"You just wasted money on a bandstand on Denton island* no one cares about so why not an Eazy-E memorial?"

You can't fault his logic.

The council was said to have "no idea who Eazy-E is" but hasn't yet formally responded to the request.

Stevens told the newspaper: "I think it would be unique, it would stand out, and would be eccentric.

"It would add to the town and bring some interest.

"Nineties gangsta rap is basically the greatest music ever anyway.

"Also he died of AIDS so on a more personal level it may raise awareness of things like sexual health.

"He needs to be remembered in some way in our town. We have nothing going for us and no notable landmarks other than a fort."

Though Stevens was adamant that an online poll created to assist his campaign showed 60/40 in favour of the Easy-E memorial, opinions from the community paint a different picture.

Newhaven's deputy mayor said: "I've lived all of my life in Newhaven and I've never heard of him, not a clue.

"I'm 72 years old and more of a Beatles fan than anything.

"If I had my way I would have statues to them around the town."

Stevens, however, retorted that the Beatles "suck".

A resident responding to the campaign online wrote: "He might be a legend but no one I know has heard of him.

"He did nothing for Newhaven so why would I want to contribute to a statue?"

The Register also approached local man (and Reg hack) Richard Speed about the campaign to be sprayed with mumbles along the lines of "Who?" followed by "is he on Radio 4?" before he admitted: "I don't know much about hip-hop. Can I have a beer now, please?" ®

Lakes on the moon? Boffins think they've found the evidence

Watery remains of meteorites could be trapped in craters

The long and painful transition is getting there

Pic Meteorite is missing link to Red Planet's wet past

Veiny green 'scum' meteorite may be first visitor from Mercury