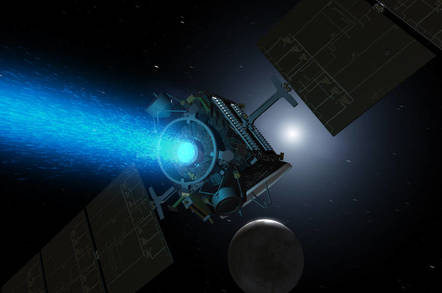 Less than a year after NASA's Dawn mission sent its last squawk back to Earth, the probe is to receive the Space Foundation's 2019 John L "Jack" Swigert Jr. Award for Space Exploration.

Launched in 2007 for a planned nine-year mission, Dawn had already survived a few close shaves with cancellation before finally leaving the planet. Following a flyby of Mars in 2009, the probe settled into orbit around the asteroid Vesta in 2011. It left a year later to make the journey to Ceres.

It arrived in orbit around the dwarf planet in 2015 and ended its mission there last year, overachieving despite suffering reaction wheel failures (the third gave up in 2017) that left the spacecraft having to burn through its hydrazine fuel to orient itself.

The mission holds a notable list of firsts and records. It is the first spacecraft to orbit an object in the main asteroid belt. It used solar-electric propulsion, notching up a record-breaking 25,700mph thanks to its ion drive. The figure is 2.7 times that of the previous record and not too far off the velocity produced by the Delta launch vehicle.

Of course, it took the ion drive considerably longer than the chemical rocket. The drive ended up running for 5.9 years in total.

Even though the mission ended when the hydrazine ran dry at the end of October, the spacecraft remains in orbit around Ceres. NASA boffins reckon it could continue circling the dwarf planet for another 20 years or more.

Acknowledging the award, Dr Marc Rayman, Dawn chief engineer and mission director, said: "Dawn's extraordinary accomplishments are the product of the talent, dedication, diligence, creativity and teamwork of people committed to space exploration and discovery – in the same spirit as the heroes of Apollo 13."

Swigert was memorably swapped for the original Apollo 13 Command Module Pilot, Ken Mattingly, just before the 1970 launch of the ill-fated mission. He was doubtless still congratulating himself on his good fortune when an oxygen tank in the spacecraft ruptured and he uttered the words "Houston, we've had a problem."

After retiring from NASA in 1977 without another opportunity to fly in space, Swigert ran for office in the US Congress in 1982, winning in November. Sadly, he died aged 51 before his term began.

The award was created in memory of Swigert in 2004 and is presented annually. Past recipients have included Cassini, the New Horizons team and the gang behind the Mars Phoenix Lander. The Rosetta Comet probe was given a nod back in 2015.

If you fancy a trip to Colorado, the award will be presented at Space Foundation's 35th Space Symposium in April. Otherwise, perhaps raise a final Friday toast to Dawn, and another for Jack Swigert. ®