Funnily enough, says NetApp, when the global economy slows down, people don't buy quite as many storage arrays 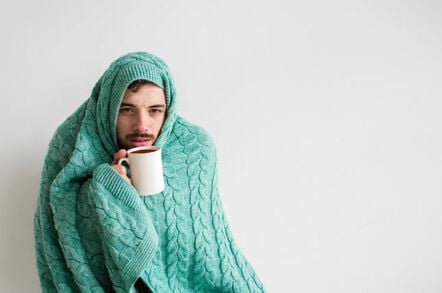 The old saying goes that when America sneezes, the rest of the world catches a cold. According to NetApp boss George Kurian, some large businesses are already reaching for the tissues.

To blow their noses. From a cold they've caught from America's looming economic slowdown and trade tariff war with China. Why, what were you thinking?

The exec, twin brother to Google Cloud head Thomas, made the comments on Wednesday as he outlined financials for NetApp's third quarter of its fiscal 2019, the three months to January 25. Turnover during the period was up 2 per cent year-on-year to $1.56bn, missing Wall Street estimates, and non-GAAP earnings per share were $1.20.

Profits reached $249m, contrasting strongly with the $479m loss recorded a year ago, when NetApp implemented US tax accounting changes.

He said big businesses had unexpectedly reduced levels of capacity purchases, due to the planet's economy slowing, with the "largest customers" NetApp sells to directly pulling back over the quarter.

"We saw a slowdown in purchasing across the board in January, driven by deteriorating outlooks for the global economy as well as uncertainty around trade policy. In the face of these headwinds, our largest customers became more cautious in their purchasing behaviour."

He added: "Those industries with specific exposure to China and public sector were incrementally more cautious."

NetApp's sales via the channel – circa 80 per cent of its business – fared far better; it was large direct enterprise sales that disappointed, and this was in regard to capacity purchased, not systems.

The revenue split was:

The hardware maintenance category let the side down but the main damage was done by insufficient product sales growth, with the US public sector looking to be one of the the culprits.

The Americas accounted for 52 per cent of the revenues, down from 53 per cent a year ago. Within that 41 per cent was commercial and 11 per cent public sector, down from 44 per cent and 14 per cent in the prior year's quarter respectively – a sudden fall. The US government shutdown probably didn't help.

The EMEA and Asia-Pacific region proportion of revenues were 33 per cent and 14 per cent respectively – the same as a year ago.

In an analyst's call Kurian went into salesman mode, as he claimed NetApp nabbed market share from rivals in the quarter, citing its all-flash array run rate of $2.4bn, up 19 per cent. Only 15 per cent of its customers run all-flash arrays so there is room to grow, he said, and this would be aided by anticipated flash price declines.

"There are a lot of weak large players in disk-based system that we will take share from, IBM, Hitachi, Fujitsu, Oracle, HPE, there's a lot of them. And even Dell has a challenged mid-range portfolio and IM portfolio. So, we feel good about our opportunities.”

Kurian saw no change in the competitive environment: "Our win rates stayed constant and our pipeline remains healthy." But "We do not have perfect visibility into all the reasons for purchasing slowdowns."

The bossman said his firm was looking to multi-cloud software and all-flash arrays to re-ignite growth.

El Reg might suggest NetApp was a year or more late in getting into hyperconverged infrastructure. Instead Dell EMC and Nutanix are enjoying by far the biggest share of HCI product bunce.

Kurian was asked by a questioner on the Q3 analyst earnings call: “Are you prepared at this point to provide kind of a [SolidFire stand-alone and HCI] run rate that you think is reasonable or a percentage of product revenue?”

He declined to "break it out", but promised "more as we head into fiscal '20". Says it all really. ®