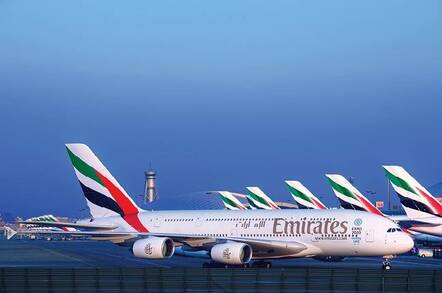 Airbus has declared it will shut down the A380 superjumbo production line in 2021, after demand from airlines for the double-decker aircraft all but collapsed.

In its annual financial results published today, Airbus confirmed rumours that it was ending A380 production. Chief exec Tom Enders said in a canned quote: "Due to the lack of airline demand we have to wind down production of the A380."

The numbers tell their own story: over the last year Airbus delivered more than 800 airliners of various types. Just 12 of those were A380s. Airbus has also taken a £407.6m financial hit on last year’s A380 programme. Much of the demand came from Emirates, which slashed its total order from 162 A380s to 123 – leaving just 14 more superjumbos to be delivered before the UAE airline's needs are met.

"As a result of this decision we have no substantial A380 backlog and hence no basis to sustain production, despite all our sales efforts with other airlines in recent years. This leads to the end of A380 deliveries in 2021," added a rueful Enders.

The A380 is, to date, the largest passenger jet ever to fly in regular scheduled service. With a total passenger-carrying capacity of more than 850 people, the A380 can move huge numbers from point to point around the world, though in airline service, typical seating layouts are under 500 in a two-class (business and economy) layout.

Unfortunately for Airbus, which estimated in the year 2000 (PDF) that the world's airlines would order more than a thousand of the so-called "very large aircraft", the underlying economics of their model broke.

With ever more long-range, medium-sized aircraft such as Airbus's own A350 and Boeing's 787 on the market, the traditional hub-and-spoke model that most airlines still operate on began to disintegrate. Why make a long journey to a large hub airport such as Heathrow or Amsterdam when there are aircraft capable of flying you direct to your destination from your closest airport?

Also, from the airlines' point of view, why would you pay large sums of money to those hub airports (the price of landing an A320 at Heathrow starts from £3,010 – see PDF*) when smaller regional airports charge less? Smaller airports also put you closer to your actual passengers and stimulate new demand in areas poorly served by air transport in the past.

As a commercial venture, the A380 was intended to kill off the Boeing 747 and help Airbus gain market share over the American company. The French aircraft was originally intended to be capable of moving more people than a 747 (meaning it earned more money per flight) at a cheaper cost by using newer, more efficient materials in its design and construction. This was a partial win. While Boeing shuttered its 747 passenger line a couple of years ago, it is still building new 747 freighters. Interestingly, Airbus shelved its initial offer of an A380 freighter a few years after entering full production of the passenger version.

A380s will continue to fly for decades to come. The aircraft has firmly cemented itself in popular imagination as bringing business-class comfort to the ordinary economy-class flyer, a perception helped by the largest operator being Emirates. Thanks to Dubai's fabulous wealth, even travelling cattle class on an A380 is a relatively pleasant experience.

Around 200 jobs in the UK are under threat from the closure of the A380 line, according to the BBC. ®

* The table on page 45 shows planes categorised as International Civil Aviation Organization Chapter 4 aircraft in noise certification terms – like the A320 – are priced from £3,010.03.