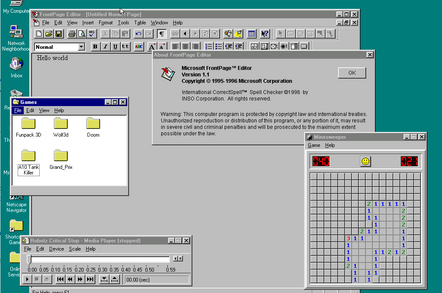 The JavaScript incarnation of Windows 95 received a version bump last week, giving those trapped in the snow or stuck in the office a lunchtime of delight listening to the bleeps and bloops of yesteryear.

We took a brief look at an earlier version back in August 2018 and the big news this time around is that sound works (yes, the Windows 95 shutdown sound induced a delightfully nostalgic twinge as it trumpeted). There are also a whole load of new toys in the download package to demonstrate the improvements in compatibility.

FrontPage 1.1 takes a bow, as does Netscape Navigator 2.0. Doom and Wolfenstein 3D also put in an appearance in this JavaScript tour-de-force.

The download, clocking in at nearly 280MB, throws up all manner of Windows Defender warnings before dumping the user into the familiar (for those of a certain age) Windows 95 desktop, with Minesweeper open and ready to go.

The all-important question is, of course, does it work? The answer is a reserved "kind of". This is, after all, very much a "just because you could, doesn't mean you should" project. The leader, Felix Rieseberg, quite cheerfully admitted that running it as an Electron app isn't ideal, saying in answer to the obvious "should this have been a native app?" question: "Absolutely."

He also suggested that virtualization would be a better bet for those seeking to run their favourite old-timey apps.

However, the lure of firing up that Windows 95 desktop once again proved too much to resist. Running Doom proved a little problematic – the author recommends switching down to 640x480 and 256 colours for that proper old-school DOS feel.

Alas, doing so left the emulator locked solid both in Windows 10 and macOS (it's good to know that I managed to bork the thing in a modern, cross-platform way) so I opted to leave things as they were and play the shooter in a postage stamp square on the screen.

It's how I used to play it on my old Amstrad ALT-386SX "laptop" anyway.

Other wanderings soon showed other limitations of the 100 per cent JavaScript implementation. While Netscape Navigator was present, getting the thing to talk to the internet was challenging (just like in the good old days) and dropping in and out of a full-screen command prompt made things get very poorly indeed.

Such nitpicking is, however, churlish in light of the achievement of getting it working at all. So, Felix, we salute you. And we will play the Robotz Critical Stop sound, just for old time's sake. ®

It will never be safe to turn off your computer: Prankster harnesses the power of Windows 95 to torment fellow students

Who, Me? Screen says 'Data save failed' so it must be true

Windows 95 roars once more in the Microsoft round-up

Sticky Notes, Green Screen of Deaths and Skype. There is no rest for the Windows watcher

Who, Me? Behold the Frankenworkstation