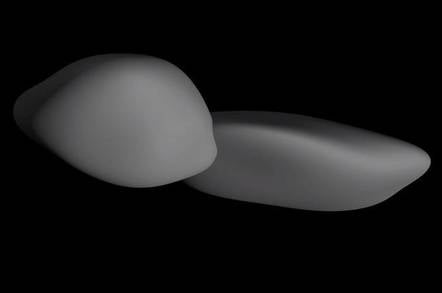 NASA's New Horizons probe mission has once again given boffins something exciting to think about. New data sent back to Earth has meant they'll need to rework our understanding about the shape of 2014 MU69 (aka Ultima Thule).

Previously, the thing might as well have been dubbed Frosty the Snowman as boffins speculated that the body was made up of two rough spheres. With the latest data, estimations based on what they thought they knew have melted away.

It's more like Peter the Pancake. Or Sally the Skipping-Stone.

The team strung together 14 images, taken 10 minutes after New Horizons was closest to the body. By combining the approach images that had already been taken and looking at stars obscured by the Kuiper Belt Object (KBO) as New Horizons hurtled past, scientists have been able to trace an outline of 2014 MU69.

"Ultima", the larger of the two lobes, is actually more like one of those excessively fluffy pancakes, while the smaller lobe (nicknamed "Thule") looks like a disappointingly deflated party balloon (or "dented walnut", according to scientists).

The discovery of MU69's considerably more svelte dimensions has scientists scratching their heads on how the shape of the thing fits in with current thinking on planetary formation. Hal Weaver, New Horizons project scientist from the Johns Hopkins Applied Physics Laboratory, said: "This will undoubtedly motivate new theories of planetesimal formation in the early solar system."

2014 MU69 is a relic from the formation of the solar system. Following the 1 January flyby, Jeff Moore, New Horizons Geology and Geophysics team lead, said of the KBO:

"We are seeing a physical representation of the beginning of planetary formation, frozen in time." The new images, taken when New Horizons was nearly 9,000km from Ultima Thule, will give Moore's team plenty to chew over.

The images also give an insight into the difficulties faced by the team in getting enough light into probe's cameras this far out. A relatively long exposure time was used to maximise the camera's signal level at the expense of some blurring of the KBO's crescent. Image processing saw the sliver sharpened and a short animation produced to show off 2014 MU69's flatter-than-thought shape. ®

3D glasses required... or you can try squinting at the screen

Crispest image yet of Ultima Thule arrives on Earth, but grab a coffee while the rest downloads