Arkansas is looking good, Kentucky not so much 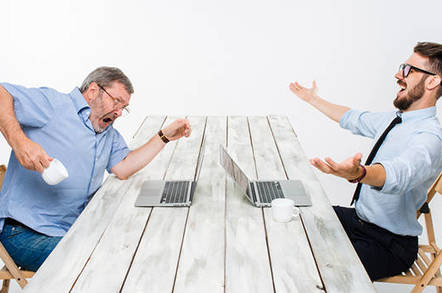 Analysis In what could prove to be an important turning point in the rollout of fiber across the US, this week the Arkansas congressional committee voted to repeal their state's prohibition on municipal broadband.

Meanwhile just 500 miles away in a neighboring state, what was once held out as the savior of Americas internet – Google Fiber – has said it is dumping its service and customers have two months to find themselves another ISP.

So it is for fast internet access in the Land of the Free: one step forward, two steps back.

The Congressional committee met in Little Rock, Arkansas and voted unanimously to get rid of restrictions that have prevented local governments in the state from setting up their own internet networks.

Why would a state capitol pass a law that stops cities from creating fiber networks in the first place? The answer is quite simple: Big Cable lobbyists. Municipal networks are the biggest potential threat to Big Cable's extremely profitable control of Americans' internet.

Installing fiber is incredibly expensive, time-consuming and bureaucratic. Outside the huge cable companies, there is really only one group that can pull together the capital requirements and get all the necessary approvals: local governments. And, because any such effort would be funded by their own taxpayers, that network would be owned by the government.

That approach has Big Cable terrified because it undercuts their entire business model by taking away their control of the physical wires. And so, for several years, lobbyists have flooded state capitols and, in many cases, successfully persuaded lawmakers to pass legislation preventing local governments from even considering taxpayer-owned fiber networks. In many cases the wording has been almost identical from state to state.

But years later, and with citizens across the US still complaining about slow, expensive internet and being told there's nothing that can be done, the tide has started turning.

What Arkansas' congressional committee vote demonstrates is that the issue has been of sufficient concern to ordinary voters that the political will is there to challenge the corporate lobbyists, to the extent of actually repealing current laws. That is Bad News for Big Cable.

Not only that but Arkansas has put together a billion-dollar fund to cover the expansion of internet access. "We are ready to empower counties and cities across the state to access this money and bring broadband to their citizens," said state senator Breanne Davis (R-Russellville) after the measure passed.

It will now go to the full Senate to consider. At which point we will see just how much sway cable lobbyists still have in the Arkansas legislature. Even if they do manage to kill it, the writing is clearly on the wall.

Here's our prediction: AT&T or Comcast or whoever the cable oligopoly decided would have most control in Arkansas will, in the next few months, announce a wonderful new fiber rollout for rural Americans in the state.

It may not be enough, as we discovered two months ago when the 1,300 residents of Charlemont, Massachusetts rejected an offer by Comcast to pass a measure that will see them pay an average of $133 per household for the next 20 years to fund construction of their own network. The cost of internet access will work out basically the same in the short and medium term but in the long term, residents should rake in the benefits. And cities in Arkansas may soon be able to do the same.

Meanwhile, just a few hours north-east of Little Rock, in Louisville, Kentucky, Google Fiber has announced it is shutting up shop.

That is just the latest move in Google's scaling back of fiber provision. At one time, Google's bold decision to try to break Big Cable stranglehold on fast internet access was hailed as the future. Here was a company with the necessary funds and know-how to blow up a controlled market.

And, at the beginning at least, it worked: Google offered much faster internet access to thousands of people in select cities and charged reasonable prices for doing so. But as time went on and Google realized that the physical aspect of installing actual cable in the actual ground was not something it was particularly good at, it soured on the idea.

It is, let's be clear, not an easy thing to install infrastructure. But Louisville has the unfortunate distinction of making it clear how even a company as focused and efficient as Google can screw up when working outside their core skills.

We give you the cautionary tale of "micro trenching." Wtf is micro trenching? It is Google-speak for doing a terrible, sloppy job in order to cut corners and costs.

Typically when a company installs a fiber cable – or any cable - they dig a pretty big hole, well, a trench about a foot wide. It is often in the middle of an existing road and after it's been dug they lay down some ducting and then tarmac over it. This is time-consuming and expensive.

Not only do you need all the equipment and workmen, you also have to apply for, pay for and get the relevant permits, and that often involves quite of bit of negotiation. Once the ducting is down, you then have to feed the cable through – and this is also expensive because it requires specialist equipment.

Now, there are lots of ways to avoid doing all of that. Finding and using existing ducts is a big one – and is another reason why local government can often install networks faster and more cheaply, because they already own the ducts. But technique that Google Fiber in Louisville particularly took to was so-called "micro trenching."

With this approach, you don't dig a big trench, install a duct, fill it in and then feed the cable through it. Instead, you dig a small, narrow trench about an inch wide, install a "micro duct" and simply lay down the cable then and there, saving huge amounts of time and trouble (60 per cent, apparently).

Why doesn't everyone do this? Well, as the civil engineers among you will no doubt have already figured out, because the likelihood of it failing is significantly higher. This is especially true if, as Google Fiber did, you don't even bother to dig down the typical four inches for a micro trench but come up with your own idiotic terminology of "nano trenches" that are only two inches deep.

What happens when you dig down just two inches into a road, run a cable, shove some asphalt on top and call it a day? Yep, you guessed it, they pop back up again.

In fact, according to one local news outlet, people were literally tripping over Google Fiber cables in their roads. "They are popping up out of the road all over the place," one resident complained. There's even a picture of one of them.

And Google in its official announcement this week admitted that this super-sloppy install was a big part of why they were getting out. Of course this is Google, so it didn't actually do something idiotic that is now running away from, oh no, it was doing what it does best: innovating.

"We were trialing a lot of things in Louisville," it explains, "including a different type of construction method - namely, placing fiber in much shallower trenches than we’ve done elsewhere."

"Innovating means learning, and sometimes, unfortunately, you learn by failing. In Louisville, we’ve encountered challenges that have been disruptive to residents and caused service issues for our customers." What this means is: we did a shit job and the cables are popping out the road.

But at least Google is sorry. Why? Because the company is "not living up to the high standards we set for ourselves, or the standards we’ve demonstrated in other Fiber cities."

It then warns: "We would need to essentially rebuild our entire network in Louisville to provide the great service that Google Fiber is known for, and that's just not the right business decision for us."

Jesus, Google can't you just admit you did a bad job without having to immediately go on about how great you are? Nerds are so insecure it's painful. But the good news is that the company is going to spend some of its billions to make sure everything is all patched up before it heads out of town.

Don't be stupid – of course it's not, it's going to cut and run. But don't worry because like an obnoxious self-involved teenager, it has learnt a lot in the process. "The lessons we’ve learned in Louisville have already made us better in our other Google Fiber cities. We’ve refined our micro trenching methods and are seeing good outcomes elsewhere."

Well bully for you.

Here's hoping that the cities in Arkansas when they finally do get the ability to bypass Big Cable and Google and install their own systems that they learn from this debacle and do a proper job installing it.

And so goes another week of internet access in America. ®

Wire cuts, ad complaints, and big promises around the States