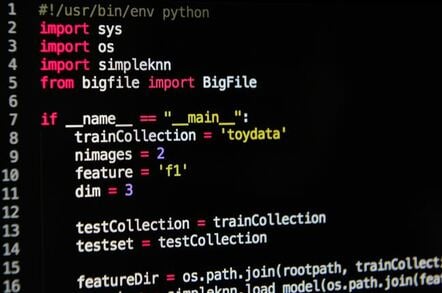 The Python programming language is now used more for data science than web development, according to a new survey.

The poll, conducted by the Python Foundation and JetBrains (which makes the PyCharm IDE among other things) involved over twenty thousand Python developers from more than 150 different countries. It asked programmers with an affinity for the language what they use Python for the most.

"At first glance, the results suggest that web development is a strong leader (27 per cent), beating data analysis (17 per cent) by a large margin," the survey states.

"But if we take a closer look, we see there has been growth with machine learning (11 per cent). If we bundle data analysis and machine learning together into a single 'Data science' category, this amounts to a stunning 28 per cent."

"Stunning" may be overstating the situation, given how prominent Python has been in AI-oriented frameworks over the past five years. But the ascendancy of Python for data science is noteworthy given the healthy interest among developers in other science-focused languages like Julia and R.

In its January 2019 index of programming language popularity, TIOBE declared Python the language of the year for 2018 because it gained the most ranking points. The software biz says that C, C++ and Java consistently placed in the top three positions and now Python has joined them at the head of the pack.

Python is also more the main language of Python survey respondents (84 per cent) than it was in 2017 (79 per cent). It's not an exclusive relationship however: Half of those using Python as their main language also report a dalliance with JavaScript. A recent HackerRank survey characterized JavaScript as the most popular programming language.

Among those who say Python is a secondary language, the most common use for Python is DevOps-oriented tasks – system administration and writing automation scripts. Python has a long history as a "glue" language for connecting different systems.

The transition from Python 2, which is no longer actively developed, to Python 3 continues, with 84 per cent of respondents saying they use v3 most. In the 2017 survey, that figure was 75 per cent. Python 2 maintenance is scheduled to end next year.

Companies that use Python have been making that change too. Dropbox, which is written mainly in Python, began the migration process in 2015 and last year said it had shifted over a million lines of code to Python 3.

Another surprise coming out of the survey is the surging popularity of Flask, a bare-bones web framework that has long been overshadowed by the bells-and-whistles Django framework. In 2017, Django was the most popular Python tool for making web apps, beating out Flask (41 per cent to 32 per cent). In 2018, Flask grew 15 percentage point to gain the lead (47 per cent to 32 per cent).

Survey co-conductor JetBrains may have taken note of the challenge posed by Microsoft's Visual Studio Code to its PyCharm IDE. While PyCharm remains the most popular tool for Python development, with a combined survey share of 35 per cent for its community edition and professional edition, Visual Studio Code saw its popularity among respondents jump from 7 per cent in 2017 to 16 per cent in 2018. ®