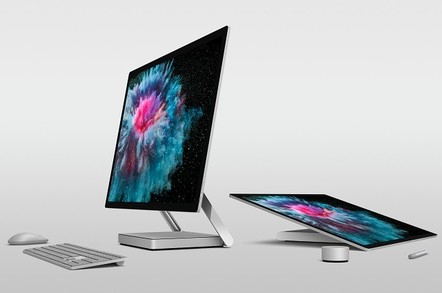 Well-heeled Brits can now slide their sticky fingers over the screen of Microsoft's flagship deskslab, the Surface Studio 2.

The thing was announced back in October 2018, at the same event where Microsoft surprised the world by unleashing the Windows 10 October 2018 Update. The resulting furore over the cursed update's testing (or lack thereof) overshadowed the new Studio hardware, which is a shame because it is a nice, if eye-wateringly expensive, bit of kit.

We took a look at the original back in 2016 and rather liked it. The tilting screen was pleasing to the eye and we described the hardware grunt as "pretty good". Faint praise, considering its flagship nature.

For 2018, Microsoft upped the specs and dumped the option for an i5 CPU or spinning rust. All three configurations receive an Intel i7-7820HQ and either a 1TB or 2TB SSD. RAM comes in at 16GB or 32GB. Reflecting the fact that the launch was last October, graphics are taken care of by Nvidia in the form of a 6GB GTX 1060 or 8GB GTX 1070, which is plenty of power to shovel around the 4500 x 3000, 192 PPI 28" Pixel Sense display. The graphics hardware will, however, struggle to run the latest games at the higher settings before long.

For the money, we'd have preferred something a bit more recent from Nvidia and Intel – it is 2019 after all. The box is, of course, not particularly upgradeable either.

Buyers will also get four USB 3.0 ports and 1 USB-C socket and yes, the headphone jack is still there. Kind old Microsoft also bundles in a Surface keyboard, mouse and pen with the thing, but stops short of including the innovative Dial (which can be used when the screen is tilted) – that will set UK customers back another £89.99.

UK buyers can have one of the three possible configurations on their desk for Apple-baiting prices that start at £3,549, rising to an impressive £4,749 for the fully loaded version.

Prices thankfully include VAT but do not compare well to what Americans pay. Over the pond, the slab starts at $3,499 and Microsoft will also throw in $100 towards some Surface Headphones. ®