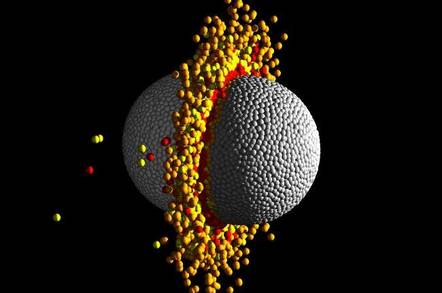 Astronomers believe they may have uncovered the first tantalizing evidence of two exoplanets that have smashed into one another, according to new research.

Over short timescales, certain planets appear to be stagnant. Scientists have to find signs that they have undergone drastic changes that took place over millions or billions of years. They’re mainly affected by two scenarios: One where their parent star’s crippling radiation strips them of their atmospheres, and the other is having to weather the impact from crashing into other massive objects.

Scientists have found many exoplanets being battered by stellar rays, but have yet to spot a collision. Now, a large international group of researchers reckon they’ve found one that bears the brunt of such a monumental accident.

The astroboffins report the Kepler 107c exoplanet is surprisingly dense. Most of its mass - about 70 per cent - is in its iron core, while the remaining fraction is locked up in its mantle as silicates. It’s more than twice as dense as Earth, but what’s more puzzling is that it’s three times denser than its neighbor Kepler 107b, despite both planets being of near identical size.

One of the ways Kepler 107c could have gained all that extra mass is by stealing it from another planet. “The difference in density of the two inner planets can be explained by a giant impact on Kepler-107 c that removed part of its mantle, significantly reducing its fraction of silicates with respect to an Earth-like composition,” the researchers wrote in a paper published in Nature Astronomy this week.

After the crash, its star Kepler 107 got to work chipping away at the planet's upper layers with solar radiation, leaving behind the gigantic dense core it has today.

To study the idea further, however, Savita Mathur, co-author of the paper and a researcher working at the Institute of Astrophysics of the Canary Islands in Tenerife, Spain, said the team plan to study its star.

“We need to know the star to better understand the planets which are in orbit around it,” he concluded. ®