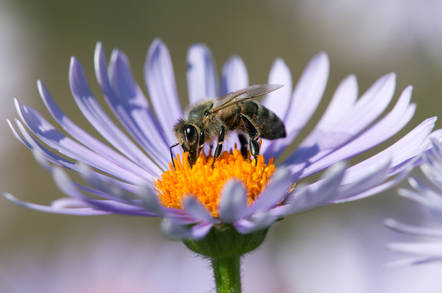 The common honeybee is clever enough to do simple arithmetic, according to research published on Wednesday.

Bio-boffins at RMIT University and Monash University in Australia, and the University of Toulouse, France, claim to have discovered this ability in bees over a series of experiments.

Fourteen nectar slurpers were trained to add and subtract by associating types of calculation with a color. Each insect was placed into a Y-shaped maze, with a "sample stimulus" – basically a picture – containing a certain number of objects.

The bees are shown this sample stimulus before they fly into the ‘decision chamber’ via a hole. Now, here’s where its number crunching time.

The fuzzy insects are then presented with two options. One wall shows a picture with the correct number of squares after performing the addition or subtraction, and the other wall has one with the wrong number of squares. If the bee settles on the correct wall by landing, it’s rewarded with a sweet drop of nectar. But if it chooses the wrong wall, it’s punished with a bitter quinine drink.

It’s hard to visualise, so here’s a video of the bees doing maths.

To make sure the bees weren’t just memorising locations, the researchers made sure the correct answer wasn’t always on the same wall. Each bee finished 100 trials to learn how to add and subtract. Interestingly, some were faster learners than others. The smarter bees managed to complete their mathematical training over four hours, the slower ones took about seven hours.

We'll be impressed when the ones at the top of the class can solve quadratic equations.

After these lessons the bees were tested. The same experiment was carried out, but this time there was no reward or punishment. The exam was made up of four questions: Two addition and two subtraction sums.

All bees scored an accuracy 70 per cent or higher, Adrian Dyer, lead author of the paper published in Science Advances, told The Register.

The mean grade was about 80 per cent, so they’re not too shabby. It shows the bees have some form of long-term memory to remember the mathematical rules, and some short-term memory to recall the numbers they're operating on.

“The statistics shows a continuous improvement over the course of 100 trials, and suggests that bees needed at least 50 trials to be making choices that were different to chance expectation,” he explained.

Insects aren’t the only animals that can do basic maths. Children are taught simple sums from a young age, but monkeys, chimpanzees, orangutans, parrots and even spiders can add and subtract, apparently.

Dyer believed that the findings might impact AI: “[Systems] using methods like deep learning can learn complex problems, but typically takes relatively long learning phases - millions of trials. By using bio-inspired approaches, it is often possible to develop efficient solutions to improve learning, and since bees learn within 100 trials we now know there has to be efficient ways of solving the problem.” (He's not the only researcher who reckons artificial intelligence could learn from nature.)

Bees are a favourite for behavioral research. Determined to gather as much nectar as possible for their hives, they’re hardworking test subjects and will often participate in experiments for an entire day. They can also be quite fun, nudging a ball here and there to play soccer. ®