E-waste partly to blame for proliferation of deceptively marketed silicon 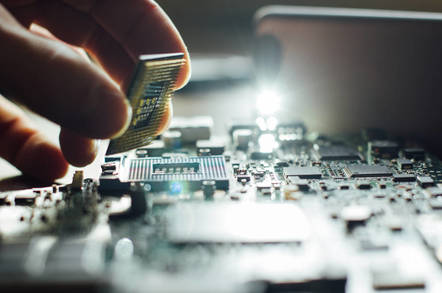 Rogelio Vasquez, the owner of California-based PRB Logics Corporation, has pleaded guilty to selling fake branded semiconductor chips from China, some of which made their way into US military systems.

From July 2009 through around May 2016, according to the indictment, Vasquez acquired old, used or discarded chips that had been altered to appear as new from sources in China, and then proceeded to sell those integrated circuits (ICs) to subcontractors who resold them to customers in the US, including defense contractors.

Nick Hanna, US Attorney for the Central District of California, warned counterfeit goods that fall short of specifications pose a potential threat due to the possibility of failure.

“Some of the counterfeit parts in this case were installed in military applications, which means the trafficking of these circuits posed a threat to national security," he said in a statement last month.

The indictment suggests the deceptively branded chips included ICs from Analog Devices, Intel, and Xilinx; there are no allegations they chips cause any actual harm.

According to the plea agreement, Vasquez in 2012 bought fake ICs from China and sold them to a US defense contractor which then provided the counterfeit parts to a primary defense vendor. The suspect chips ended up in a US Air Force classified weapon system.

Bloomberg Businessweek says that one of its reporters was invited to witness a sting operation against Huawei, the Chinese telecom giant that has been accused by the US government of fraud, conspiracy, and trade secret theft. The sting, which took place at CES in Las Vegas last month, arose from an investigation into claims Huawei tried to steal the manufacturing technique behind Akhan Semiconductor's durable screen material called Miraj Diamond Glass.

Vasquez also admits that in 2016 he sold eight ICs that he believed would be used in Air Force's B-1 Lancer Bomber. And he acknowledges selling some 8,000 counterfeit ICs between April and May 2016 to a company that resold them to a defense contractor. The chips ended up in products used by the US Army, Navy, and Marine Corps.

The total theoretical value of the counterfeit goods sold and seized is estimated to be about $900,000, had the chips been genuine and sold for list price. As part of his plea Vasquez has agreed to forfeit almost $100,000 in ill-gotten gains. He is scheduled to be sentenced on May 10, 2019.

In a 2013 white paper, the Semiconductor Industry Association (SIA), a chip trade group, said semiconductor counterfeiting has risen since the mid-1990s due to the technology boom, e-waste programs, and a growing number of brokers and distributors to meet the needs of buyers and sellers.

Such inquiries have become less common in recent years, the SIA claimed in recent comments submitted as part of Congressional rule making. The trade group wants more seizures of counterfeit electronics and industry information sharing rather than a new export licensing regime as a defense against fake chips.

The investigation of Vasquez and PRB Logics Corporation was conducted by US Immigration and Customs Enforcement’s (ICE) Homeland Security Investigations (HSI), the Defense Criminal Investigative Service, and the National Reconnaissance Office's Office of Inspector General (OIG). ®