Seismometer looking for whole lot of shakin' going on 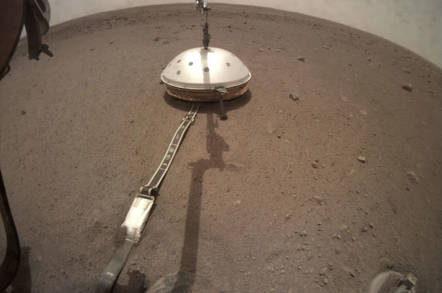 Pic NASA’s InSight lander has been revamped to let scientists study the interior of Mars for the first time.

The lander’s seismometer was carefully placed on the surface of the Red Planet in December last year, and has now been enclosed in a metallic dome. The cap acts as a shield protecting the sensitive Seismic Experiment for Interior Structure (SEIS) instrument from wind and heat, both of which can rattle the device and poison its data.

The shield is made out of chain mail and is stuffed with thermal blankets at the bottom. The shape is aerodynamic to ensure any passing wind presses the instrument towards the planet's surface so it won't topple over.

“Temperature is one of our biggest bugaboos," said Bruce Banerdt, the principal investigator for the InSight mission, on Monday.

"Think of the shield as putting a cozy over your food on a table. It keeps SEIS from warming up too much during the day or cooling off too much at night. In general, we want to keep the temperature as steady as possible."

The deployed shield goes over a titanium shell, roughly the size of a watermelon, and in turn, the shell covers a copper hexagonal box. The shell has been vacuum sealed to insulate SEIS further, and the box is covered in an layer of cells that helps trap air.

If the temperature is too much for all three layers to handle, however, SEIS has another trick up its sleeve. Parts of the seismometer can expand and contract to balance out the effects of heating, to prevent the results from being contaminated from thermal noise.

Things are a little easier on Earth. The seismometers on Terra Firma are protected from the negative effects of temperature by being buried, typically, four feet (1.2 metres) below ground.

NASA hopes that InSight will help scientists study Mars’ core, mantle and crust to unlock secrets of how it formed and how will it evolve in the future. The dome won’t be the last piece bit of new kit the lander will be deploying on Mars.

Next week, scientists hope to deploy HP3, a heat probe that will burrow 16 feet (5 metres) below the surface of the Red Planet to measure how much heat is flowing in its interior, and where the heat is coming from. ®