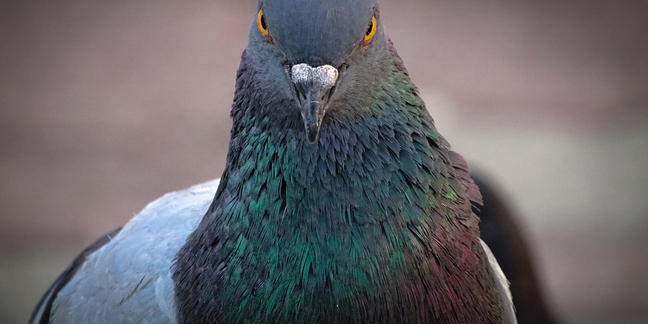 Nikola Tesla obsessively fed them, the Queen keeps hundreds at Sandringham, and Charles Darwin was enthralled by what they could teach us about natural selection. But for most of us, they're little more than rats with wings. And now one has only gone and shat on a three-month-old's face.

We're talking, of course, about pigeons.

Residents of Nettleham View flats in Lincoln, in the east Midlands of England, have complained of living in a blizzard of feathers and poo for years now.

The Longhurst Group housing association, responsible for the building's maintenance, attempted to ease the infestation by fitting spikes to the ventilation units where the birds nest – but if pictures in LincolnshireLive's report are anything to go by, the blighters couldn't care less.

In fact, they seem to be making the most of the additional footholds and structure.

One mum living there "reached breaking point" when the pigeons strafed her baby son's pushchair, splattering the three-month-old's face with runny white soup.

Stacey Copland told the news site: "I had seen the recent reports saying people had died after getting a lung infection from pigeon droppings in a Glasgow hospital. So when William got pooed on I was heartbroken and in floods of tears.

"My first reaction was to get him inside as quickly as possible and clean it off. It hit the pushchair handle and then splashed on his cheek.

"I was on the phone to them [Longhurst] in floods of tears and I've just not had anything back.

"It's heartbreaking because I have told them so many times. It's really frustrating because this has been going on for over three years now.

"I have lost all faith and respect in them."

Copland added that she was concerned for her the health of son, who "has been coughing and sneezing all the time".

Neighbour Laura Thomas said she also fears for her son, who was born premature and has sensory needs.

"We have a sensory sandpit and paddling pool but we can't leave them out. We can't leave out any garden chairs or furniture.

"Zack... has a tendency to lick things so I'm always worried that he might lick something that has had poo on it."

Although the housing association's efforts have had little effect, a spokesperson told LincolnshireLive: "We remain committed to finding a solution to this problem and are now considering installing netting, as businesses in the vicinity have done, to prevent the pigeons from nesting."

Will that work? We turn to you, enterprising El Reg readers. What would you do to break the siege? Vultures? Maybe there's a tech-based solution. Drones managed to take out Gatwick, Heathrow and New Jersey airports recently. How can we harness that raw power? The people of Nettleham View are relying on you. ®

Come on, give it up and let Speckled Jim rest in peace

Fanciers clamour for brave dead bird to get top gong

Enemies prepare for a goddam swarm of mobes with wings!