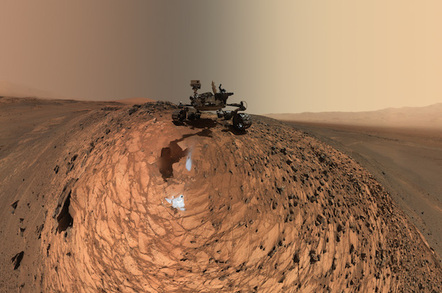 Brainiacs have today revealed how they rejigged instruments aboard NASA’s Martian rover Curiosity to measure changes in the Red Planet's gravity over its surface.

"Curiosity, essentially, has a new science instrument, six and a half years into its mission," said Kevin Lewis, lead author of a published paper describing the work, and an assistant professor at Johns Hopkins University. "This allows us to get new information about the subsurface of Mars in ways the rover was never designed to do."

A team of researchers from NASA’s Jet Propulsion Laboratory, John Hopkins University, Carnegie Institution, University of Maryland, and Arizona State University, all in the USA, were responsible for calibrating the Curiosity’s accelerometers for gravimetry. The nuclear-powered rover has highly sensitive accelerometers, and the aforementioned boffins were able to repurpose these to measure gravity on Mars.

As the rover climbed Mount Sharp, a five-kilometre-high formation (that's roughly three miles high) in the center of the Gale Crater, the team measured the difference in gravity it experienced along the way.

This allowed the researchers to measure the density of the rock underneath Curiosity's wheels. To their surprise, the rock was less dense than expected, according to the rejigged sensors.

This provides hints as to how Mount Sharp formed in the Gale Crater. Some scientists believed that it was once filled with sedimentary rock that slowly eroded away over time. However, being so porous, it now looks like it grew by accumulation of material over time.

"This study represents the first gravity traverse and measurement of rock density on Mars. The low density of rocks in Gale Crater suggests that they did not undergo deep burial," said Nicholas Schmerr, coauthor of the paper and an assistant professor at the University of Maryland, on Thursday.

"This could mean that Mount Sharp was not excavated by erosion, but rather was constructed by wind deposition and other processes. Either way, it seems that Mars has had the capability to lay down significant amounts of low-density sedimentary rocks that record a complex environmental history." ®