And if traffic is slow, that's just another efficiency saving 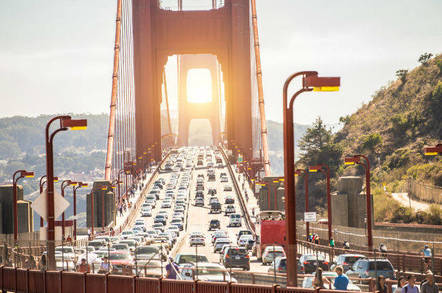 New research anticipates congestion problems as owners of self-driving cars allow their steeds to prowl the streets instead of forking out for parking charges.

The paper by Adam Millard-Ball, an associate professor of environmental studies at the University of California, Santa Cruz, was published in the rivetingly named "Transport Policy".

Millard-Ball makes the point that far from requiring automated parking abilities, such as those trumpeted by the likes of Volkswagen, a self-driving car need never actually park at all. The robotic chariots can simply putter around the streets until the driver is ready for collection.

London, for example, is regarded as one of the most expensive places in the world to actually park a car. On-street parking near Vulture Central is around £4 per hour. And that's on top of London's £11.50 congestion charge and the impending £12.50 Ultra Low Emission Zone fee.

However, with some electric car manufacturers claiming ranges in excess of 300 miles, one could easily imagine a scenario where a jumped-up milk float could whirr one into town and then spend a few hours sat in traffic while the user puts in a day's work.

And there, according to Millard-Ball, lies the rub.

In the paper, which used a traffic microsimulation model and data from downtown San Francisco, the professor showed that automated vehicles (AV) "could more than double vehicle travel to, from and within dense, urban cores".

Furthermore, with plans afoot to have the robot chauffeurs chat to each other, things could get worse as the AI geniuses plot ways to increase their efficiency. Millard-Ball observed: "Because cruising is less costly at lower speeds, a game theoretic framework shows that AVs also have the incentive to implicitly coordinate with each other in order to generate congestion."

Self-driving vehicles have already been spotted roaming London streets, although politicos think it will be a decade or more before anything more mainstream than the Greenwich Trundlers makes an appearance. The UK government, on the other hand, reckoned back in 2017 that full-on driverless cars would land in 2021.

Two years to go then.

We contacted Transport for London to get their thoughts on the issue, but have yet receive a reply. London Mayor Sadiq Khan was already a bit worried about the tax hit from electric vehicles.

To alleviate Khan's taxing concerns, Millard-Ball's paper suggests a new charging model: "A time-based charge for occupying the public right-of-way, whether parked or in motion."

Alternatively, Londoners at least have the option instead of standing nose to armpit on one of the cities horrifically overcrowded underground trains as they rumble through the city's creaking infrastructure. ®

UK.gov: We're not regulating driverless vehicles until others do

Autonomous vehicles inquiry set up in the UK