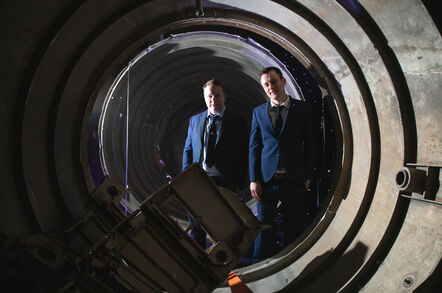 Skyrora CEO Vladimir Levykin and the firm's Daniel Smith inside the remains of the Black Arrow projectile, in a storage facility in Penicuik, Scotland

Roundup As NASA continued to listen for its stricken Mars rover and SpaceX moved closer to a first crewed launch from US soil, rocket fans had plenty to occupy them last week.

Black Arrow is back. Well, a bit of it

The UK has the dubious distinction of being the only country to have successfully developed, then dumped, the capability to launch satellites. Between 1969 and 1971, four Black Arrow rockets were fired from the Woomera range in Australia, the last of which managed to fling the Prospero satellite into orbit.

While the fifth Black Arrow never flew and can be seen strung up in London's Science Museum, the surviving parts of the fourth rocket that fell back to Earth during staging have now been recovered from outdoor display at William Creek in Australia and returned to the UK.

The return means that UK space fans can now add Penicuik in Scotland to the trail of places that mourn the UK's launch capability.

Edinburgh-based rocketeers Skyrora stepped in to move the hulk from its resting place to somewhere nearer the launch outfit's headquarters. As well as rescuing relics, Skyrora also hopes to fire a two-stage suborbital rocket into space this year, having managed to get four miles up with a scaled-down booster, the Skylark Nano, in 2018.

While all eyes were on SpaceX's Falcon 9 due to fly the Demo-1 mission, the crew of competitor Boeing was quietly shuffled about ahead of its impending commercial mission to the International Space Station (ISS).

NASA astronaut Eric Boe had been assigned to the much-delayed first flight of Boeing's CST-100 Starliner capsule back in 2018. He was to fly alongside fellow NASA 'naut Nicola Mann and ex-NASA, now Boeing astronaut Chris Ferguson.

Ferguson, of course, commanded the final Shuttle mission in 2011, STS-135. Boe's last jaunt to space was aboard STS-133, the final flight of Discovery. Mann, who served as a test pilot for the F/A-18 Hornet and Super Hornet, has yet to make her first spaceflight.

Boe was swapped out last week for Michael Fincke, a veteran of two ISS expeditions, due to what the agency discreetly referred to as "medical reasons". NASA has a long history of dropping 'nauts when question marks over health crop up – a notable example was Ken Mattingly's avoidance of Apollo 13 after an unlucky exposure to measles. Mattingly went on to fly on Apollo 16 and performed a deep-space EVA from the spacecraft.

Boe has replaced Fincke as the assistant to the Chief for Commercial Crew at NASA's Johnson Space Center.

The flight was the first for the DL variant of the rocket family, effectively the same core as its siblings, just with a couple of 1 metre-diameter strap-on boosters, each carrying 12.2t of propellant, to boost the payload. In this case, around 2,000kg combined.

The launch was the 46th of the PSLV family, the maiden flight of which was in 1993 in the form of a PSLV-G. That first flight failed, but other than another outright failure in 2017 and dumping a satellite in the wrong orbit in 1997, the PSLV has a relatively good record.

India has at least two more launches of the PSLV lined up for the first quarter of 2019, but it is the delayed Chandrayaan-2 mission which has space nerds a-quiver. The Moon mission, tentatively scheduled to launch in March, was switched over to a heftier GSLV Mk. 3 vehicle in 2018 and will drop a lander and rover on the lunar surface

China, of course, has its own trundle-bot already rolling around in the dust, and has got back into the business of launching stuff. The People's Republic clocked up its second launch of 2019 with a Long March 11 sending four satellites into orbit at 05:42 UTC on 21 January.

Two of the satellites will form a network with 10 previously launched Jilin-1 satellites, providing remote sensing data. Lingque-1A is an imaging satellite and the last part of the payload, Xiaoxiang 1-03, is a satellite to demonstrate radio communication and remote sensing. ®