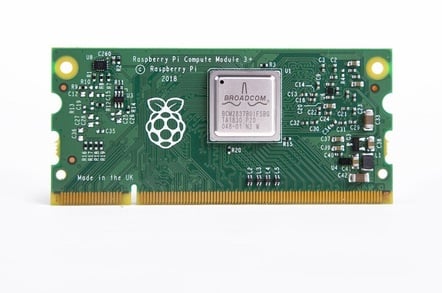 The Rasperry Pi Foundation has updated its Compute Module with better thermals, an updated application processor and bucketloads of flash memory (in Pi terms, at least).

The Compute Module 3+, a System on Module (SoM) board, is part of a hardware family that's been around since 2014 with the launch of the CM1. That original rocked a single-core Arm processor clocked to 700MHz, 512MB RAM and a mighty 4GB of eMMC.

It's the size of a DDR2-SODIMM and will happily plug into a DDR2-SODIMM connector, but don't go slotting it into your PC because the pins don't do the same thing at all. This being a computer and all.

The module is aimed at those wishing to embed their Pis into all manner of machinery but can't be doing with the form factor and requirements of the original Pi. As such, all data and power is dealt with via the DDR2-SODIMM-like connector, making for a very compact device.

The Pi Foundation points to the likes of NEC as an example, where the electronics giant has used the diminutive board as the heart of the some monstrous digital signage. It has also made an appearance in media players and industrial control systems.

First the good news – the Compute Module 3+ is a drop-in replacement for the previous version from a form factor and electrical perspective.

And the bad news? It is a drop-in replacement... which means that power supply limitations will keep the CPU at 1.2GHz instead of the 1.4GHz of the Pi 3B+. The board has also put on a tiny bit of spare tyre in the form a small increase in z-height.

However, the real good news is that the Pi foundation has added more storage options up from the original "anything you want as long as it's 4GB". There are now 8, 16 and 32GB versions costing $30, $35 and $40 respectively. There is also a flashless version for those that need it.

As with earlier modules, the 3+ boasts more interfaces than a regular Pi with pins allowing users to connect two cameras, two displays and extra GPIO.

The foundation plans to keep Compute Module 3+ available until "at least" January 2026 and, in words that will be bring joy to Pi fans the world over, stated this is "the last in a line of 40nm-based Raspberry Pi products" indicating a clearing of the decks before the next generation makes an appearance. ®