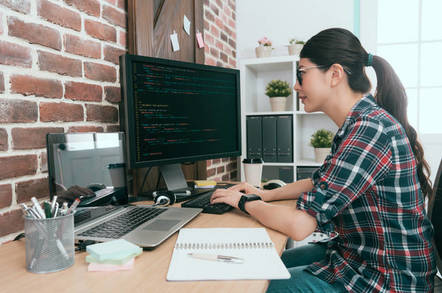 Developers rejoice! The second preview of Visual Studio 2019 is upon us and contains all manner of goodies for those brave enough to venture into the not-for-production environment.

Little has changed on the IDE front which, to be frank, is no bad thing. The increase in coding space alone made the first preview a pleasant thing to use.

The “Start Window Experience” remains, which will be a plus for some and a negative for others, while Microsoft has given the blue theme a tweak by upping contrast and dialing down luminosity. The toolbar area is now a draggable region, which makes moving the window around feel more natural.

Away from the IDE (which also includes filters for menus and components in its search) the languages supported by the toolset have also seen improvements in the latest 2019 bundle.

Those hair-shirted individuals who like their code to be of the C++ variety will find in-editor code analysis warnings (with analysis running automatically in the background), an updated implementation of the C++ Lifetime Profile Checker and a slew of back-end improvements, including link-time speed-ups.

For C#, it is all about version 8 of the language. The gang at Redmond has added some new features this time around, most notable of which are improvements on the pattern matching in C# 7, including recursive patterns and switch expressions. The team reckon the improvements will result in clearer logic in code.

F# fans get a preview of F# 4.6, which introduces Anonymous Record Types. These are F# record types that don’t have explicit names and can be declared ad hoc. The team has also revamped the language service itself, which Microsoft says will improve load times for big solutions.

Python also sees some love in Preview 2. It is now more simple to add environments and Anaconda has been removed in favour of the smaller Miniconda (although you can switch back if you’re happy installing Anaconda yourself). But the most interesting addition is the arrival of code collaboration tool, Live Share.

Python fans have already been able to use Live Share through Visual Studio Code, but sharing sessions can now be kicked off in Visual Studio 2019 for those keen on a bit of collaborative debugging.

Visual Studio Code also gets a nod with new code classification colours being rolled out in Visual Studio 2019, which are similar to its open source sibling. New refactoring and codefix capabilities have also arrived to please .NET developers.

Adding support for Kubernetes has also been upgraded thanks to the eponymous tools for Visual Studio being into the Azure workload. Having jumped through a few hoops ourselves to coax things into life last year we were pleased find the process of adding Kubernetes support to an ASP.NET Core application made considerably more simple.

Finally, we are happy to confirm that Microsoft’s assertion that load performance for new mobile projects has improved dramatically. The Visual Studio team reports performance gains of 50 per cent in some situations and while we’ve not seen that sort of jump, the whole process feels considerably snappier. Microsoft also reports improvements in build performance for Xamarin.Android 9.1.1 or higher.

We took the updated Preview for a spin and found it to be stable, although some users who grabbed it as soon as it appeared encountered problems with the installer getting stuck in an update loop. By the time we installed the thing, the problem had been resolved but is a salutary reminder that this is preview code after all.

But if you have a quiet weekend ahead, then the new C# patterns alone make it worth spending a few hours poking around the innards of Redmond’s new togs. ®